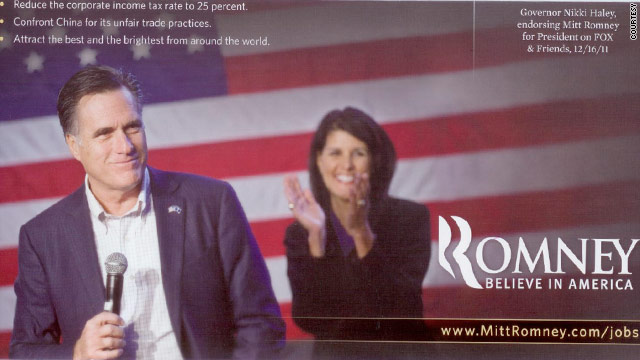 Columbia, South Carolina (CNN) - Mitt Romney is putting his endorsement from Gov. Nikki Haley front and center in a new mail piece sent out across South Carolina on Thursday.

The front flap of the mailer, which touts Romney's economic development plans, displays a photograph of Romney on stage with Haley at a recent campaign rally in New Hampshire.

The mail piece was provided to CNN by a Republican voter in Columbia.

The mailer declares Romney a "conservative businessman" who will "make America more competitive in the global economy" by speeding up domestic energy production, rolling back regulations and opening up foreign markets to U.S. products

The brochure – the third South Carolina mailing from the Romney campaign in the course of a week – also makes issue of a Boeing facility in North Charleston that was recently threatened by a high-profile National Labor Relations Board complaint about unfair practices.

Republicans, led by Haley and South Carolina's Congressional delegation, had seized on the complaint as an example of the Obama administration siding with unions over the private sector.

The mailer says that as president, Romney will stop "attacks from big labor and big government" against free enterprise.

The NLRB withdrew the complaint in December and production at the Boeing plant resumed.

Some Republicans have questioned whether Haley is an asset or a liability for Romney in the early primary state given her underwhelming poll numbers.

But Romney advisers have quietly pushed back against those claims and provided CNN with recent internal polling showing that two out of three South Carolina Republican voters approved of Haley's job performance.