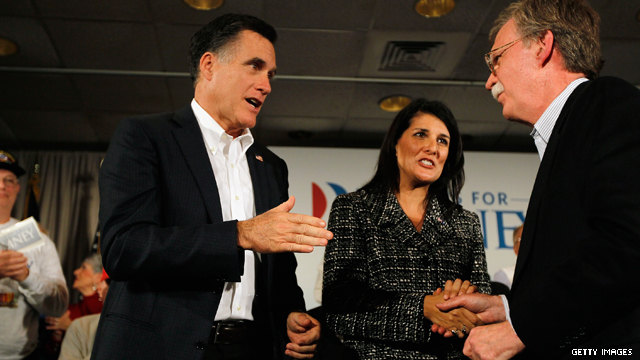 Hilton Head, South Carolina (CNN) – Mitt Romney took the stage at a veterans event Friday in Hilton Head surrounded by a trio of high-profile supporters who defended the presidential candidate, as well as injected enthusiasm and a bit of unpredictability into the evening.

Sen. John McCain, South Carolina Gov. Nikki Haley and former Ambassador John Bolton spoke with Romney before a packed audience in a small room at a Hilton Head hotel, where voters crammed into an overflow room and listened from a balcony.

Before the event, traffic backed up onto the highway, at one point preventing Romney’s bus from entering the compound.

John Bolton, who endorsed Romney this week, made his debut on the campaign traveling circuit. The former United Nations ambassador harshly criticized President Obama for his foreign policy – going further than Romney has done – and said the president did not deserve any credit for what is considered a major coup of his presidency: the killing of Osama bin Laden.

Former House Speaker Newt Gingrich and Texas Gov. Rick Perry have accused Romney of callously shedding jobs in his career at Bain – a criticism Romney’s campaign has labeled an attack on free enterprise.

Haley exhorted the audience to “value the free market.”

“Let's not let ourselves get involved in a debate and join the Democrats when we start trashing the free market or trashing private enterprise,” she said.

Though Romney has trumpeted his message of economic turnaround in the state where many are struggling, the first several audience questions dealt with other issues.

One woman in the audience asked Romney whether he believed in Jesus Christ.

Romney said he did, and then went on to explain that he respected people of different beliefs.

“I happen to believe that Jesus Christ is the son of God and my savior. But I know other people have differing views and I respect those views and don’t believe those qualify or disqualify people for leadership in our nation,” he said. “I think over time, the great majority of us have decided that this is something that doesn’t determine who should be our president or our vice president or a governor or our senator,” but based upon character.

On Friday the Romney campaign released a radio ad in socially-conservative South Carolina titled “Shares Our Values” that touted Romney’s support among Christian conservatives for his views on “the sanctity of life, the sacredness of marriage, and the importance of family.”

Throughout the evening on Friday, McCain kept the audience in stitches with a running line of jokes – many of which some voters might remember from 2008.

Perhaps the most popular, at least among the veterans in the audience, was McCain’s knock on the Marine Corps.

“When I graduated from the Naval Academy I tried to get into the Marine Corps – but my parents were married,” McCain joked, to shocked laughter.