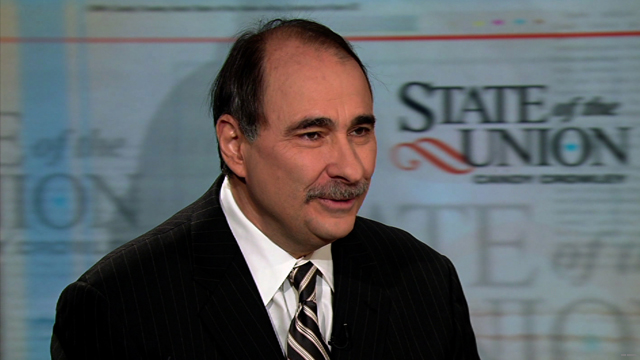 (CNN) – David Axelrod said Mitt Romney's assertion that he would run against the Obama administration's bailout of the auto industry in the general election represents the different visions for America held by the Republican frontrunner and President Barack Obama.

In an interview broadcast Sunday on CNN's "State of the Union," Axelrod, a senior adviser to the president's re-election effort, defended the auto bailout while pointing to Romney's record as CEO of Bain Capital.

"Saving an industry, as the president did, is different than strip mining companies in order to – in order to profit off of them, which is, in many cases, what Mr. Romney did," Axelrod told CNN Chief Political Correspondent Candy Crowley. "The question is, is that the philosophy that you want in the White House?"

In a recent interview with CBS News, Romney, the former Massachusetts governor, said he made tough choices at Bain, just as the president did through legislation that impacted the auto industry.

"The president took the reins of General Motors and Chrysler, closed factories, closed dealerships, laid off thousands and thousands of workers," Romney said. "He did it to try and save the business. We also had, on occasion, to do things that are tough, to try and save a business."

Romney's record at the venture capital firm has been a focal point for Democrats and the president's re-election campaign. Democratic operatives and surrogates have said the lay-offs during Romney's tenure at Bain are indicative of an economic philosophy that puts profits above people. Two-time White House hopeful Romney, meanwhile, has emphasized the jobs created during his tenure at the company and said the losses were a product of the free market.

When asked about a recent CNN/ORC International poll that showed 53% of registered voters thought Romney was best equipped to improve the economy, compared with 40% for Obama, Axelrod said Romney misses a key issue facing the country today.

Americans are "working harder than they've ever worked, and for the last decade, their income has been flat," Axelrod said in the interview that took place Saturday. "That is a central issue of our time. How do we create an economy [in] which the middle class is growing, wages are growing, standards of living are not declining, but growing? That's what a successful economy looks like. He misses that point."