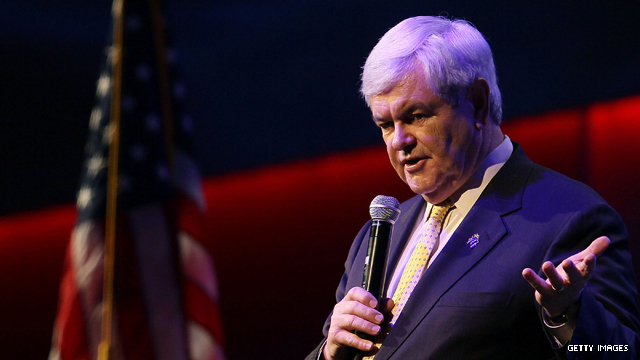 Gingrich talks of 'baggage' in church

North Charleston, South Carolina (CNN) – Newt Gingrich defended himself before a church congregation Sunday, touching on the reason some of his opponents, and some voters, might consider him a flawed presidential candidate.

He told those gathered for the Sunday service at the Cathedral of Praise that he is “somebody who has the courage to stand up and tell the truth, somebody who is prepared to fight for the America that you and I believe in.”

"Courage is when you have fear. If you have faith in God, you can be not afraid," Gingrich said borrowing a phrase from Pope John Paul II.

The former House speaker converted to Catholicism in 2009 and attends services regularly at the Basilica in Washington, where his wife, Callista, sings in the choir.

"Whoever you vote for I think you would have to attest that there's a man who loves his country and who knows his country, and regardless who you vote for, he's one of us," Lewis said of Gingrich.

Lewis led a prayer for the candidate and his family with him in the front row, while his wife was in Washington attending Sunday mass at the Basilica.

Lewis said he invited Gingrich and former Pennsylvania Sen. Rick Santorum, who spoke there Saturday evening, to give a "statesman’s" view of America.

"I believe the time has come to be prepared for what will be a big fight. Let me be quite clear. If you want peaceful, pleasant, managing the decay, I'm the wrong person, because what I stand for is such a disruption in the Washington establishment,” Gingrich said. “You can see it if you watch the television. The talking heads are terrified that I'm going to win because they understand I represent the end of the game.”

"And I'm prepared to fight over the nature of America's future and I'm prepared to fight, whether that's with the courts, the bureaucracies, the Congress, including my own party, because I believe what we need desperately in America today is captured in the simple Bible phrase, without vision the people perish."