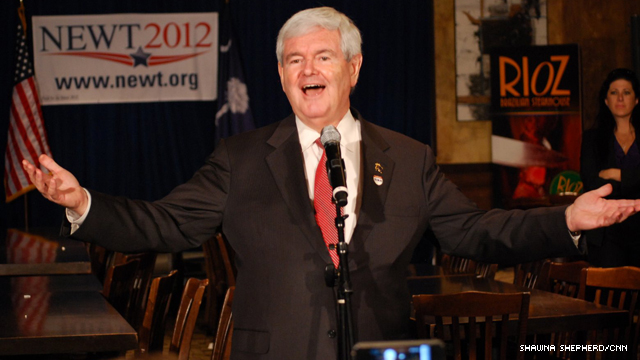 Gingrich was speaking to a tea party-friendly audience in South Carolina's Horry County when he painted presidential frontrunner Mitt Romney as unelectable in a general election.

"The only reason [Romney] is electable right now is because he has raised more money from Wall Street to buy more ads than anybody else in the race, and we're not going to win that game," Gingrich said. "If you count how much money you can raise as the number one test of electability, Obama's going to drown him."

Gingrich has five days to drive home the message that Romney can't beat President Barack Obama. In order to stop the former Massachusetts governor's crushing momentum, Gingrich needs to rally conservatives behind him over competitor Rick Santorum, who has strong evangelical support and has fared better than the former House speaker in Iowa and New Hampshire.

"If you're a conservative, just look at the polls. I am the only candidate capable of stopping a moderate from winning the nomination," said Gingrich.

Gingrich delivered the same message at the South Carolina Tea Party Convention just minutes after Santorum spoke at the same meeting, but he didn't draw clear contrasts with Santorum there.

During a press availability Monday, Gingrich pointed out why he's a stronger candidate than the former Pennsylvania senator.

"Evangelical voters would like to have a nominee that will win a general election, and somebody who set the all time Pennsylvania record for the size of their defeat has a harder case to make as to why they could be elected," Gingrich told reporters.

"If you vote for Sen. Santorum, in effect you're voting for Gov. Romney to be the nominee because he's not going to beat him. And the only way you can stop Gov. Romney for all practical purposes is to vote for Gingrich. That's just a fact and it's a mathematical fact now."