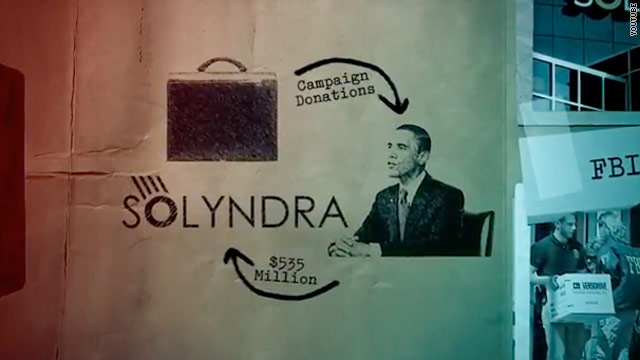 (CNN) - A conservative group announced Monday they were spending millions to spotlight President Barack Obama's involvement in the failed green energy firm Solyndra, which received loan guarantees from the federal government before it declared bankruptcy.

Americans for Prosperity said they spent $6 million to run the minute-long spot in the battleground states of Michigan, North Carolina, Ohio, Wisconsin, Virginia and Iowa. The ad began airing Monday.

The conservative group touted the ad as the "first major ad buy of 2012 focused on the Obama Administration's failed policies."

"This ad is important because it puts a spotlight on how cronyism and blind ideology came together in the halls of the White House," Tim Phillips, President of Americans for Prosperity, said in a statement.

Solyndra failed after receiving $535 million in federal loan guarantees in 2009. Prior to the bankruptcy, President Barack Obama visited the company to tout it as a model for green industry.

The spot accuses Obama of helping secure the loan guarantees for Solyndra for political reasons.

"We all know about Solyndra," the narrator says. "The White House emails. The FBI raids. Solyndra investors raised campaign money for Obama. The government gives Solyndra half a billion in taxpayer money. Politics as usual."

Americans for Prosperity supports many tea party movement causes, and has pushed for reducing government regulation in the oil and gas industries,

The group was co-founded by industrialists Charles and David Koch, who are major supporters of conservative and libertarian causes.

In November, AFP ran a similar ad attacking Obama for the Solyndra affair. That buy was for $2.4 million, and ran in the battleground states of Florida, Michigan, New Mexico and Virginia.