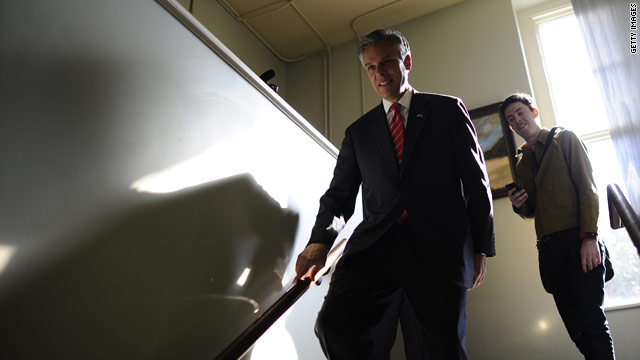 Flanked by his family and campaign advisers at a press conference in Myrtle Beach, just hours before a debate here, Huntsman thanked his supporters and rebuked his own party, calling on Republicans to unite in their fight against President Barack Obama.

He asked the GOP candidates to stop the "onslaught of negative and personal attacks" against each other, saying the negative tone of the race is hurting the party and the country.

"At its core, the Republican party is a party of ideas," Huntsman said. "But the current toxic form of our political discourse does not help our cause and is one the main reason the American people have lost trust in the elected leaders."

He also called Obama a "corrosive" leader and blamed him for dividing the country at a time of need.

He has said that Romney's shifting positions on certain issues make him "completely unelectable" in an election against Obama.

Huntsman acknowledged "our differences and the space between us on some of the issues" but said Romney is best equipped to fix the troubled economy.

Romney did not appear at the event with Huntsman but issued a brief statement following the announcement.

"I salute Jon Huntsman and his wife Mary Kaye," Romney said. "Jon ran a spirited campaign based on unity not division, and love of country. I appreciate his friendship and support."