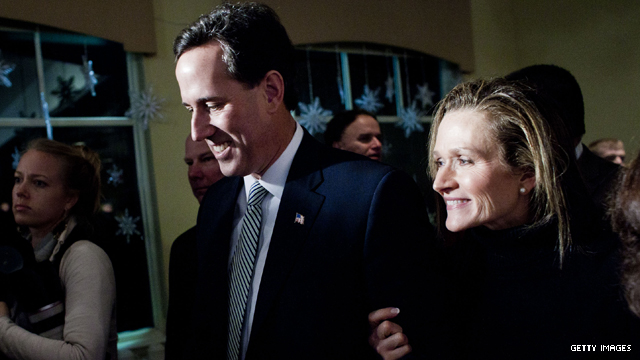 "I think it is very sad what the gay activists have done out there. They vilify him, and it is so wrong," Karen Santorum said at a South Carolina forum. "Rick does not hate anyone. He loves them. What he has simply said is marriage shouldn't happen."

Santorum, who bills himself as an unapologetic social conservative, has been known to engage in arguments with audience members on the campaign trail over his opposition to same-sex marriage.

His wife's comments Monday came in response to a question from a supporter with a gay son. While the woman said her son was fine with Santorum's position on same-sex marriage, she still feels conflicted over her son's impression that Santorum "hates gays."

His wife quickly jumped in to denounce the reputation Santorum has gained among some activists as "anti-gay."

"As far as hating, it's very unfortunate that that has happened. A lot of it is backyard bullying," Karen Santorum said Monday.

Long before Santorum jumped in the race, some gay rights advocates attempted to "redefine" Santorum's name online by creating a website that lists a graphic, sexual definition for the word "Santorum." The website eventually gained enough traction so that it now falls as the first listing for a Google search of the candidate's name.

Along with his wife, Santorum weighed in on Monday, saying some people misinterpret his views against same-sex marriage as attacks.