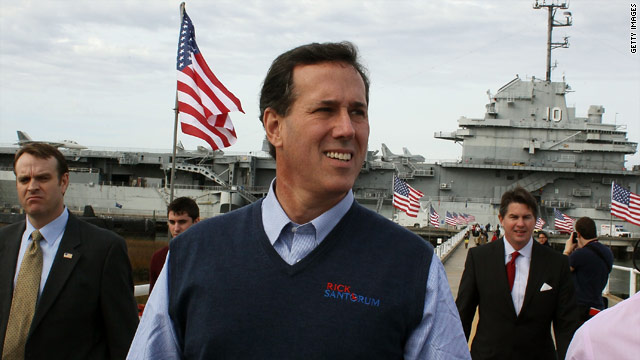 Mt. Pleasant, South Carolina (CNN) - At a press conference aboard the USS Yorktown here this morning, Rick Santorum found himself at a loss for words when asked about Mitt Romney's consistent defense of a super PAC ad criticizing Santorum's support of voting rights for former-felons.

"If Mitt Romney believes that an ad that says that I voted to allow felons to vote by showing someone in a prison uniform which gives the clear impression that it means people serving in prison should be able to vote –and he says that is accurate– that is, I, I, I am stunned," Santorum said, visibly upset at Romney's continued defense of the ad. "I am actually stunned."

After finding his train of thought, Santorum went on to call Romney's defense of the ad a "character issue," and that his support for such a "lie" should disqualify him from being president.

"He's trying to run for president of the United States and there [are] ads out that are absolutely, certifiably false and he says they're okay because it gets him political advantage, this is a huge character issue on Mitt Romney's part," Santorum said. "He needs to step up and do the right thing and quit playing dirty politics. He's playing dirty, dishonest politics when he's standing behind this super PAC."

During an interview on Fox News following last night's debate, Romney claimed that he hadn't seen the super PAC's ad, but that judging by Santorum's onstage description of it, it sounded accurate.

"Rick Santorum says look it's not fair that the super PAC, I guess, – and I haven't seen it – but says that he wants to give voting rights to felons," Romney told Fox News host Sean Hannity. "Well, he wants to give it to people who were former felons. I think they still call people who were in jail, convicted of a felony, they still call them felons. So it is - apparently it is accurate. I haven't seen the ad, but it sounds like it is accurate."

Santorum addressed reporters before a town hall elsewhere on the decommissioned aircraft carrier. The candidate's staff had set up the event with roughly 200 chairs in the audience, but as it got closer to the scheduled start time, it became clear that turnout wouldn't be nearly that high. So the staff removed roughly 100 chairs. By the time Santorum took the stage at 9 a.m. ET, less then half the remaining chairs were full, and probably a quarter of the audience was well under legal voting age.

During the town hall, Santorum was once again pushed on his electability, and perhaps still upset from questions asked at his press conference, the usually mild former-senator was a bit more pointed than usual.

"He's a manager," Santorum said of Romney. "He's not someone who's got bold vision for this country, not someone who has proven to be a bold leader when he was governor of Massachusetts. He was managing. He always talks about his legislature he had to deal with. You think Harry Reid and Nancy Pelosi are going to be easy? Let me assure that the level of acrimony that any president's going to walk into in 2013 is going to make Boston look like a walk through Faneuil Hall."

Santorum went on to call Romney "a CEO," adding that this country needs someone who's able to "not just execute, but inspire."