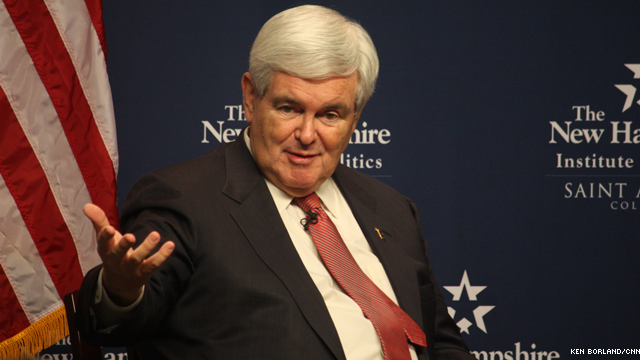 Gingrich pushes back against Romney's new line of attack

Hitting back, Gingrich pointed to his work passing President Ronald Reagan's economic policies in the House during the 1980s. Meanwhile, he argued Romney "wasn't doing anything about" the economy.

"How would he know?" Gingrich said on CNN's "The Situation Room with Wolf Blitzer."

Earlier in the day, Romney accused Gingrich of falsely taking credit for creating millions of jobs while he served as a congressman from Georgia.

The attack represented a shift in tone from Romney, who earlier in the week praised Gingrich's work on the Hill.

But in the interview, Gingrich painted himself as in integral figure in developing Reagan's economic policies, saying 16 million new jobs emerged through "lower taxes, less regulation and American energy."

When he became House speaker in 1995, Gingrich said he "brought out the Reagan playbook and worked with (President) Bill Clinton" to implement similar programs.

Responding to Romney's claims, the former speaker said "Massachusetts was 47th in job creation" when Romney led the state as governor.

The two candidates will battle it out Saturday for the top spot in South Carolina's presidential primary. According to a new CNN/TIME/ORC International poll released Wednesday, 33% of likely Palmetto State primary voters say they are backing Romney, with 23% supporting Gingrich.