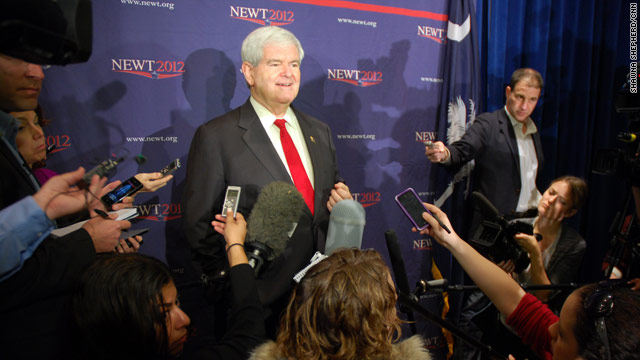 Speaking at a press availability, Gingrich said his staff had confirmed the 31% rate, and was gathering the necessary paperwork for his tax disclosure.

"I paid a 31% rate," Gingrich said of his 2010 taxable income. "We're pulling together the documents, we hope to get it out sometime tomorrow."

On Tuesday, Romney said he was "probably" paying an effective tax rate of 15% since most of his income was derived from investments rather than salary.

The former House speaker joked that he would name his optional flat tax plan after the businessman and former Massachusetts governor.

"[W]e are going to name our flat tax the Mitt Romney 15% flat tax," Gingrich said in his opening remarks at a town hall meeting in Winnsboro.

"The 21st Century Contract with America at newt.org has a 15% optional flat rate for every American," Gingrich later told reporters. "So my goal is not to raise Mitt Romney's taxes, it's to let everybody pay Mitt Romney's rate. I'm not going to criticize Romney, I'm just going to say, shouldn't we all have the option of a flat tax at the same rate that he was paying?"

Romney said he was planning to release his income tax records in April after the 2011 tax filing deadline. He said filing then would provide voters with the most up-to-date information.

Gingrich said he will release his 2010 tax returns Thursday, and "then we'll match Romney and we'll release 2011 as soon as it's put together."