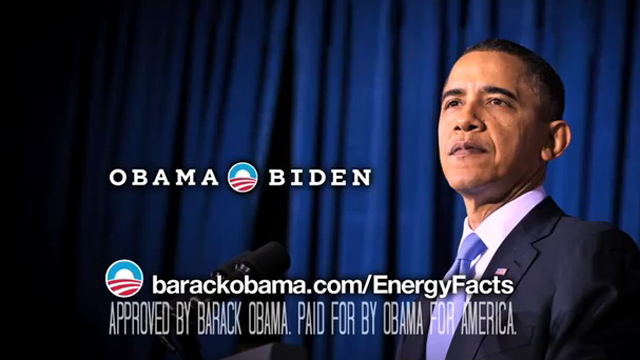 As the five remaining Republican presidential candidates face off at the CNN/Southern Republican debate in South Carolina, the man they're trying to replace in the White House, President Barack Obama, is going up with the first paid TV commercials of his 2012 re-election bid.

The Obama campaign announced Wednesday that the 30-second spot, which defends the president's record on energy and touts his work to toughen ethics rules, will run starting Thursday in the battleground states of Iowa, Michigan, North Carolina, Ohio, Virginia and Wisconsin.

"Secretive billionaires attacking President Obama with ads fact-checkers say are not tethered to the facts. While independent watchdogs call this President's record on ethics 'unprecedented'. And America's clean-energy industry? 2.7 million jobs and 'expanding rapidly'," says the narrator of the commercial. "For the first time in 13 years our dependence on foreign oil is below 50%. President Obama. Kept his promise to toughen ethics rules and strengthen America's energy economy."

The ad ends with the president saying over an image of himself: "I'm Barack Obama, and I approve this message."

A senior campaign aide told CNN that industrialists Charles and David Koch, who are major supporters of conservative and libertarian causes, were an inspiration for the commercial.

"The Koch brothers provided us with an opportunity – when Americans hear that their attack ad is funded by oil executives who oppose the President's plan to eliminate tax breaks for oil companies and oppose investment in clean energy to keep America running on oil, it's immediately clear to them that the attack isn't credible. And they provided us an opportunity to educate Americans about the President's strong energy record which has increased domestic production across the board, including renewables, saved consumers money, and decreased our dependence on foreign oil," the campaign aide said.

This is the first major ad buy by the Chicago re-election team. The campaign did, however, go up in late November with a tiny ad buy on satellite television to run two spots in which the president asked viewers to go to his campaign website or call a phone number to pledge their support for his re-election and to become involved in his campaign.