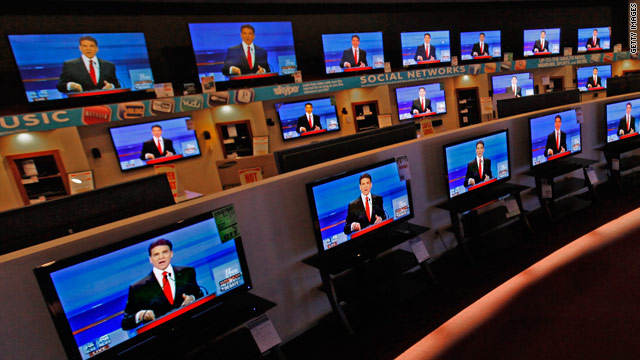 Charleston, South Carolina (CNN) - Turn on your television here in the Palmetto State, tune it to a local TV station, and during the commercial breaks you get inundated with a barrage of campaign spots.

Unlike Iowa and New Hampshire, which preceded South Carolina in the primary and caucus calendar, this first-in-the-south-primary state is experiencing an avalanche of ads. Many of those commercials are negative in nature, and many of them are coming not from the GOP presidential campaigns, but rather independent super PACs that are supporting the Republican candidates.

"Newt Gingrich's attacks are called foolish, out of bounds, and disgusting. Newt attacks because he has more baggage than the airlines," charges the narrator in an ad criticizing former House Speaker Newt Gingrich.

The spot's by "Restore Our Future," a group that is backing Romney, the former Massachusetts governor who's making his second run for the Republican presidential nomination.

"We need a candidate who can beat President Obama. Mitt Romney is not that candidate," claims the narrator in a new spot by the pro-Gingrich super PAC "Winning our Future."

"One is a serial hypocrite, who lobbied for Freddie Mac before the housing crisis and supported the individual mandate before Obamacare. Another, a counterfeit conservative who opposes right-to-work, massively increased spending and funded Planned Parenthood. Finally, a flip-flopper who's been on all sides, supported the TARP bailout and provided the blueprint for Obamacare. Three men. One vision," charges the announcer of the ad.

Television ads began airing in South Carolina even before Iowa's January 3 caucuses, and started to hit with full force during the week of the New Hampshire's January 10 primary, as the campaigns and the PACs supporting them began to lay groundwork in the Palmetto State for what was then shaping up to be the decisive contest of the GOP race.

Romney's campaign and "Restore Our Future" spent heavily early on. A Romney ad calling the need to cut federal spending a "moral responsibility" was spotted frequently during commercial breaks last week, as was the commercial attacking Gingrich's "baggage."

The spot that generated the most attention in South Carolina came from the cash-flush, pro-Gingrich "Wining Our Future." The group bought a documentary about Romney's tenure at the private equity firm Bain Capital and promised to run $3.4 million worth of campaign ads promoting the film and attacking Romney as a corporate raider.

But the super PAC still has not spent the promised money - in part because it's becoming next to impossible to find airtime with the glut of TV ads currently running in the state. "Winning Our Future" also shifted tactics over the weekend, rolling out a different ad that sharply criticizes the health care law Romney passed in Massachusetts and calling it a blueprint for "Obamacare."

From January 10 through Monday, the Romney campaign spent $375,000 to run spots in South Carolina's relatively inexpensive media markets, according to estimates by Campaign Media Analysis Group (CMAG), a company that tracks and estimates the costs of campaign ads running on the air. But the pro-Romney "Restore Our Future" has shelled out more than $784,000 to put up spots, and another pro-Romney PAC has spent $83,000.

Texas Gov. Rick Perry, who's making a last stand in South Carolina, has spent more than $237,000 to run ads over the past week, with a pro-Perry super PAC adding another $12,000.

"Iowa got heavy late with only some candidates and groups engaged and New Hampshire never really was heavily targeted. South Carolina is being targeted at absolutely the highest levels, not only are each of the candidates advertising, but each of their super PACs are advertising as well. It looks like what one would see if a midwestern presidential battleground market in late October that also had a Senate race," says Ken Goldstein, CMAG president and CNN's consultant on TV advertising.

But wait, there's more. Expect the spending totals here in South Carolina to accelerate over the final few days before Saturday's primary. And in a close contest, a powerful TV spot could be influential in determining the outcome in the Palmetto State.