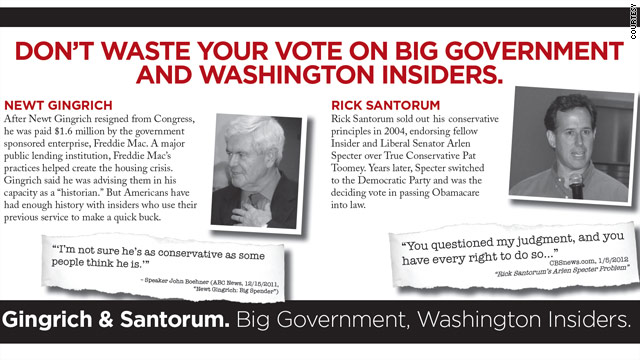 The mailer is one of several that the Perry campaign is sending to South Carolina voters on Wednesday, just three days before the January
21 primary.

Another hard-edged piece hitting mailboxes highlights Perry's service in the military and contrasts his resume with Barack Obama's, questioning the president's patriotism.

"Some choose community organizing as their profession," reads the text, laid over an ominous picture of Obama. "Others choose to serve their country."

Perry's message against Gingrich and Santorum, meanwhile, is that neither can be trusted to bring conservative ideals to the Oval Office.

Echoing Perry's message on the stump, the mailer calls Perry a "conservative of conviction, not of convenience."

Gingrich is then criticized for trying to make "a quick buck" off of the "government sponsored enterprise" Freddie Mac. (The former House Speaker's consulting company earned $1.6 in fees from working with the federally backed mortgage giant before the national housing market collapsed.)

"Don't waste your vote on big government and Washington insiders," reads the two-sided postcard, which was provided to CNN by a Republican source.