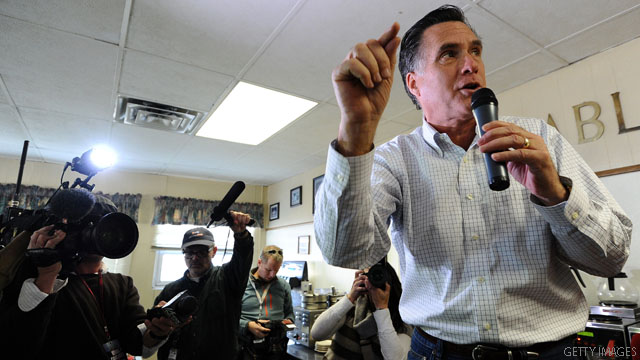 (CNN) - Mitt Romney led the Republican presidential pack in Ohio in a new a Quinnipiac University poll released Wednesday, and stood in a statistical tie with President Barack Obama in the hotly-contested battleground state.

Ohio holds its primary March 6, Super Tuesday. The heavily-populated Midwestern state carries 63 pledged delegates, a major prize for any candidate seeking the Republican nomination. In November, the winner of Ohio's general election contest will come away with 18 electoral votes.

Romney, the former governor of Massachusetts, led his GOP rivals in the new poll, getting the backing of 27% of registered Republicans. His closest competitor was former Pennsylvania Sen. Rick Santorum, who was at 18% in the new survey. Former House Speaker Newt Gingrich, who was running well ahead of Romney in Ohio a December Quinnipiac poll, stood in third at 17%.

Other candidates were running well behind, with Texas Rep. Ron Paul getting 10% and Texas Gov. Rick Perry at 4%.

The lead in Ohio could increase if Romney maintains momentum in upcoming primary contests.

"If he continues to win primaries elsewhere, that margin will likely increase by the time the voting comes to Ohio on March 6," said Peter A. Brown, assistant director of the Quinnipiac University Polling Institute. "But if he should lose his momentum – and some primaries – then that lead might not be safe."

The poll was taken January 9-16, almost entirely after results from the New Hampshire primary were known. Romney won New Hampshire decisively, grabbing 39% of the vote.

In a potential general election match-up with Obama, Romney was at 42% and Obama at 44%. That was within the poll's sampling error of plus or minus 2.4 percentage points. Romney was the Republican who fared the best against Obama in the hypothetical race. Santorum stood at 38% to Obama's 54%, while Paul was at 39% and Obama at 48%. Obama also topped Gingrich in a match-up, 52% to 38%.

Ohio is considered a key battleground in the 2012 election. The state helped propel then-President George W. Bush to reelection in 2004, and bolstered Obama's win in 2008.