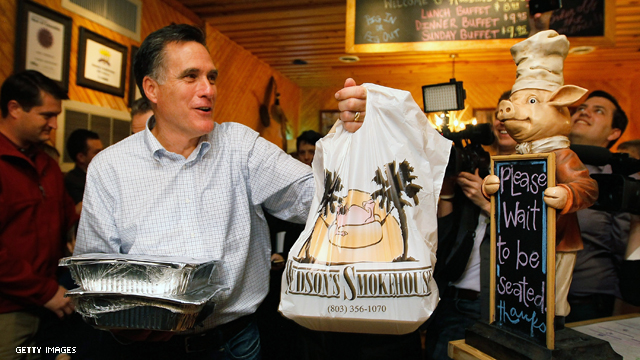 The GOP candidate bounded off his campaign bus for a stop at Hudson's Smokehouse in Lexington, an authentic barbecue joint he visited during his first presidential run four years ago.

Declaring he had "come back to the scene of delicious food," Romney joked that "Yankees" up north thought barbecue meant hot dogs or hamburgers on the grill.

"But you know barbecue is manufactured right in a smokehouse like this," he told owner Robin Hudson.

Hudson led Romney and the press corps covering his campaign into a small smokehouse where a throat-tingling vinegar smoke billowed throughout the room.

As Romney discussed his favorite type of barbecue - pulled pork - and his distaste for catfish - "not a fish man so much. I mean I eat it 'cause I'm told it's good for me" - the press corps hacked and choked amid the smoke.

The candidate, who ignored press questions during the stop, saw a way to jibe his constant companions on the trail.

"I want to get these guys to line up behind the vinegar operation here," Romney laughed. "I want to see my friends turn green."

The candidate then made his way through the restaurant, greeting families and asking patrons to vote for him in South Carolina's Saturday primary.