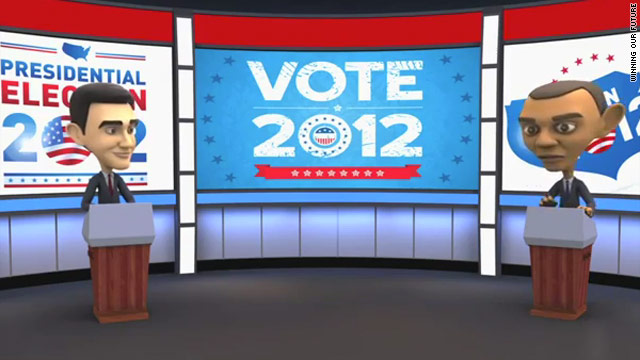 The cartoon splices together statements Obama made about Romney, casting the two candidates as politically similar. The ad gets at the heart of Gingrich's campaign pitch that a "Massachusetts moderate" like Romney will not create enough contrast to effectively debate Obama this fall.

Winning Our Future is trying to bolster the former House speaker's presidential bid by injecting millions of dollars in advertising into South Carolina, a make or break primary state for Gingrich.

"Obama's Dream Debate Part I" begins with the cartoon debate moderator – who has striking resemblance to ABC's George Stephanopoulos – asking "Mr. President, just how different are you from Gov. Romney?"

Cartoon Obama says he agrees with the former Massachusetts governor "on many things," and lists abortion, gun rights and universal health care as examples.

"And on health care, well I was so inspired by Romneycare that I nationalized it and called it Obamacare," says cartoon Obama. "But now presidential candidate Romney is against the individual mandate and universal health care."

Cartoon Romney has very few response lines in the 60-second ad. When the health care issue is brought up, the animated version of Romney simply says, "whoa, whoa."

Winning Our Future super PAC is releasing three ads Wednesday to try and bolster Gingrich's candidacy and cast doubt on Romney ahead of the South Carolina primary.

Super PACs are political action committees allowed to raise unlimited funds from individuals, corporations, trade groups or labor unions to spend on advocacy for or against political candidates. But unlike regular PACs, they cannot donate directly to candidates nor can they coordinate their actions with candidates.

Winning our Future Executive Director Gregg Phillips said they are spending $1.8 million to air the new television ads leading up to January 21, in addition to approximately $3 million spent on previously released television and radio ads.

Unlike Winning Our Future's previous work, the other two ads, "Fighter" and "Prosperity," focus on the former House speaker and convey a positive, inspiring message.

Phillips said he expects the cartoon ad to generate more buzz than the Mitt Romney "King of Bain" video, that stirred up controversy when it was released last week.