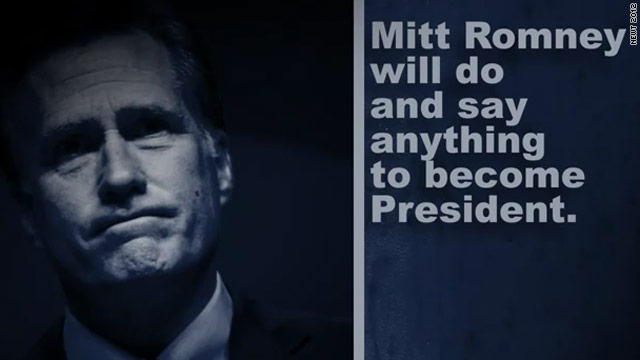 Washington (CNN) – The Gingrich campaign reached back to 2008 in its latest ad attacking Mitt Romney, accusing the former Massachusetts governor of using the same “desperate” and “dishonest” attacks he used when he ran for president in 2008.

The ad, titled “Desperate,” starts with a narrator stating, “Why is Mitt Romney attacking Newt Gingrich?” It then cuts to a clip of John McCain, a recent Romney supporter, stating, “The best indicator that I am doing very well is when you’re attacked by Mitt Romney.”

Continuing this format throughout, the ad features additional clips from 2008 presidential hopefuls Mike Huckabee and Fred Thompson, and accuses Romney of changing positions on abortion, marriage, taxes and guns to get elected. At one point, the ad features video of Thompson, a politician turned television actor, accusing Romney of “getting to be a pretty good actor.”

The ad ends with Huckabee stating, “If a man’s dishonest to get a job, he’ll be dishonest on the job.”

According to the Gingrich campaign, the tightening in South Carolina polls of 2012 is similar to the way Romney fell behind McCain and Huckabee in 2008. Romney eventually finished a distant fourth in South Carolina in 2008.

Gingrich has been eating away at Romney’s lead in the Palmetto state. With two days to go until the first-in-the-south primary, the former speaker has reduced the 19-point Romney advantage to 10 points, according to the latest CNN/Time/ORC International poll. The poll indicated that 33% of likely South Carolina Republican primary voters will back Romney, compared with 23% who say they will back Gingrich.

“The polls in South Carolina are tightening and Mitt Romney’s attacks against Newt Gingrich are getting more desperate and more dishonest. We’ve seen this play out before,” Gingrich campaign spokesman R.C. Hammond said in a statement.