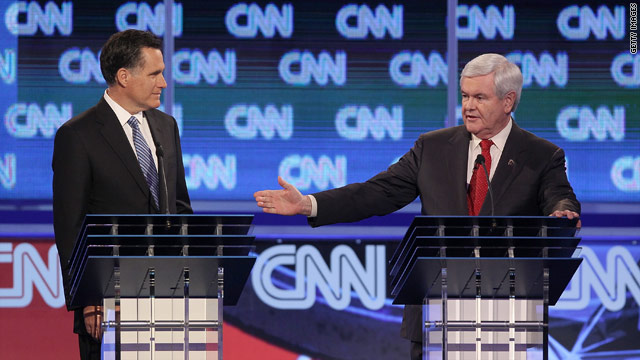 The records show Gingrich and his wife, Callista, jointly paying nearly one-third of their income in federal taxes. The campaign also released Form 990-PF records for the taxable Gingrich Foundation.

More than three-quarters - $2,525,683 - of the Gingrichs’ personal income was from partnerships and so-called S corporations, and the couple reported $450,245 in traditional salary-type income.

Newt Gingrich's occupation is reported as "consultant," and Callista Gingrich's as "executive." Each reported $10,000 income for service on a board of directors. It was not clear from the statements whether the payments were for service to the Gingrich Foundation, which reported no compensation to either the candidate or his wife.

Their foundation, meanwhile, reported grants and contributions totaling $120,000 to 14 organizations.

Gingrich has pressed Romney for tax document transparency in recent weeks, calling on the former Massachusetts governor to lend clarity to the business practices of Bain Capital, the investment company he ran in the 1990s. Romney's competitors, outside super PACs, and Democrats have attacked Romney for job losses at companies which Bain owned.

Much of Romney's income is understood to be from investments and, according to federal tax law, is assessed at a lower rate. The candidate acknowledged this when speaking to reporters on Tuesday.

"It's probably closer to the 15 percent rate than anything," Romney said. "The last 10 years my income comes overwhelmingly from investments made in the past rather than ordinary income or rather than earned annual income."

Romney said he was hesitant to release tax records for fear President Barack Obama’s re-election effort would use them against him.

"Every time we release things drip by drip, the Democrats go out with another array of attacks," he said. "I'll put these out at one time so we have one discussion of all of this. I obviously pay all full taxes. I'm honest in my dealings with people."

"I pay a lot of taxes. I've been very successful. When I have our taxes ready for this year, I'll release them," he said.

Federal Election Commission disclosure forms showed Romney earning $374,327 in speaking fees between February 2010 and February 2011, which the candidate characterized as "not very much." Gingrich's release shows him earning $21,625 in 2010 speaker fees.