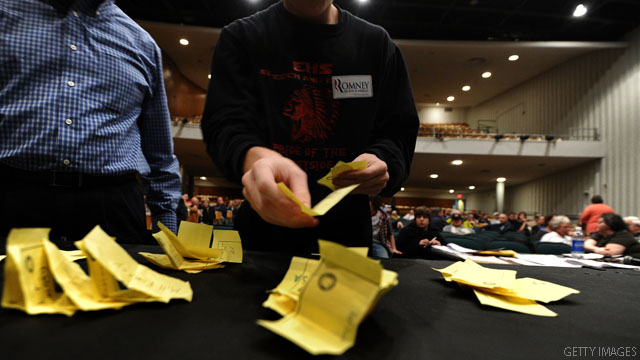 Des Moines, Iowa (CNN) - The chairman of Iowa's Republican Party said on Thursday that despite missing votes and human error discovered after the Iowa caucuses, one thing is clear from the final tally: Rick Santorum won.

"I think there was a misunderstanding regarding the certified results," Matt Strawn told reporters at the organization's headquarters in Des Moines. "One thing that is irrefutable is that in the 1,766 certified precincts that the [Iowa] Republican Party was able to certify and report, Rick Santorum was the winner of the certified precinct vote total by 34 votes."

Part of the confusion lie in mistakes in the vote counting for Iowa's 1,774 precincts. In some cases, Strawn said, inaccurate numbers were submitted on caucus night but corrected during the certification process.

One major problem is with eight of the precincts.

"Despite the most diligent efforts of our staff, there were eight precincts that did not submit any form of documentation for what happened in their precincts on caucus night," Strawn said.

That required documentation is called a "Form E."

On caucus night, precinct chairs and secretaries were responsible for keeping track of the final vote tallies, and relaying those unofficial results to the state GOP. After the Jan. 3 contest, those precinct officials were required to fill out the "Form E" with their vote tallies and deliver those to the Republican chairperson of their county. From there, the county chairperson would submit them to the state party for official certification.

The county chairpersons had 14 days to submit the documentation.

"I think the first thing you need to keep in mind is this is almost an entirely volunteer, grassroots process," Strawn said, citing it as a strength of the caucus process and his organization's intense training of caucus workers.

The chairman continued to explain what happened.

"Non-responsiveness, lost forms. I believe there was one instance where this individual had gone on vacation and had indicated to us that the forms would be coming - and they never did," Strawn said.

CNN identified all eight Iowa precincts that did not submit the required documentation. They lie across five counties.

Four of those precincts are in Lee County. The Republican Party chairman of that county – responsible for submitting the documentation to the Iowa GOP - is Don Lucas.

CNN spoke with Lucas. What happened to the "Form E's?" Lucas was asked.

"They came up missing," Lucas responded. "Those forms are nowhere to be found."

Lee continued: "I have the votes in my hands. I have the computer printout with the numbers we sent [to the Iowa GOP] via computer."

CNN asked Lucas for the numbers he claimed were the results of the four precincts.

According to Lucas' numbers, Santorum won 59 votes across the four precincts, Romney, 34. If those numbers are correct – and had they been submitted via the "Form E," confirmed by the Iowa GOP and thereby added to the certified total - Santorum would still have won the caucuses, except by 59 votes.

It's important to note, however, that CNN cannot independently verify Lucas' numbers. Also, Lucas himself may not be able to fully verify their accuracy, since he received them from the four precinct chairpersons.

Lucas has not endorsed anyone in the presidential race.

Reporters asked Chairman Strawn if the confusion leaves a black mark on this year's Iowa caucus.

"I think you could always improve. We've made dramatic improvements going into this caucus cycle."