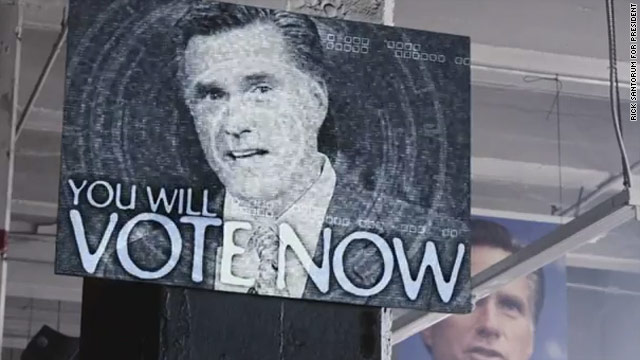 (CNN) - Rick Santorum's campaign took a page out of George Orwell's book with his latest ad Wednesday, producing a spot with a noticeable theme from the classic totalitarian novel, "1984."

The ad, "Rebellion," shows drone-like humans walking obediently in a line as images of Mitt Romney loom over their heads.

"The establishment is once again telling us to fall in line ... and vote for their backroom, hand-picked moderate candidate," the ad's narrator says.

Accompanied by daunting music, the ad's entranced characters continue trudging forward in line. Screens with Romney's image hang overhead, blasting messages that say: "You will vote now" and "You will ignore."

As the characters approach an unmarked room, they're told to cover their eyes with blindfolds. They then walk through a door labeled "Vote Today," which leads them to a ledge.

"In fact, we should simply follow them blindly ... just like we did last time ... over a cliff," the narrator says.
But one "rebellious" character - a woman wearing a pink shirt unlike the dark gray clothes donned by the other actors - dashes to the front of the line before anyone else can enter the death-trap door.

She holds up a "Rick Santorum" campaign sign, stopping the line in its track. The people start listening actively as she plays video of Santorum speaking about the need for a plan to unite the country and get "America to work."

Pleased with what he hears, one man joins the "rebellion" and takes off his gray overcoat to reveal a sweater-vest.

While the nearly two-minute video was released online, the campaign did not give details on when or where shorter versions of the ad will broadcast.