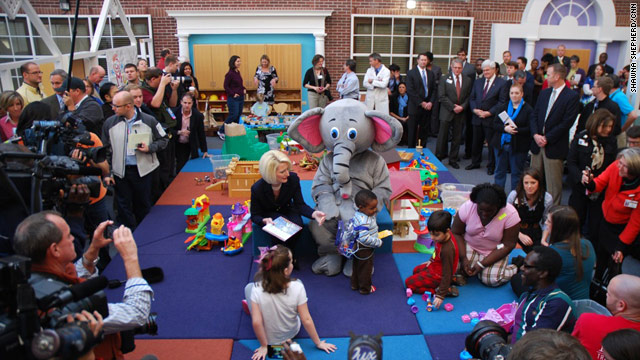 Charleston, South Carolina (CNN) - Newt Gingrich's campaign appeared to hit a rough patch Friday after a speech was canceled due to poor attendance and a town hall was re-configured as a children's book reading the day before South Carolina's critical primary.

His first speech in Charleston was scrapped at the last minute, after the campaign was alerted by event organizers that attendance was so poor, it apparently wasn't worth showing up.

Understandably the Gingrich camp wouldn't want the image of their candidate, who's been surging in the polls, delivering a speech in an empty basketball arena.

But that didn't stop other White House hopefuls from speaking at the sparsely attended Southern Republican Leadership Conference in downtown Charleston. Ron Paul was there Friday morning and Rick Santorum spoke to the group Thursday.

Spotted at the event was Charleston County GOP Vice Chairman Lin Bennett, who is still undecided on who she'll vote for Saturday. She told CNN she is considering Gingrich, but his backing out enforces a perception that he makes "rash decisions."

"He's a good guy, but once in a while he does this hiccup thing and that worries me," Bennett said.

The next scheduled event was supposed to be a town hall meeting with staff at the Medical University of South Carolina Children's Hospital in Charleston, but in the morning the press was alerted it would instead be a tour, followed by a visit to a children's play area.

A day after Gingrich's ex-wife Marianne blasted the former House speaker in interviews for allegedly seeking an open relationship between him, Marianne, and the woman he would later marry, Gingrich's current wife Callista, read her children's book to a handful of kids.

Just 24 hours before South Carolina voters cast their ballot in the Republican primary, cameras were focused on Callista reading "Sweet Land of Liberty," with the main character "Ellis the Elephant" in costume sitting next to her, while Gingrich carried on a conversation behind her with hospital employees.

While representatives with the campaign state the hospital visit was never intended to be a town hall, they never bothered to change it when they emailed other updates to the schedule.

Because of the canceled SRLC speech the campaign had to move the scheduled media availability to an afternoon event.

The campaign also inexplicably postponed one of their "Ask Newt" tele-town halls, scheduled for 11:30 a.m. ET, to Saturday.

Gingrich, who is arguably one of the more accessible candidates who gets praise on the trail for taking questions from voters and the press, will hold two town hall meetings before the day ends.