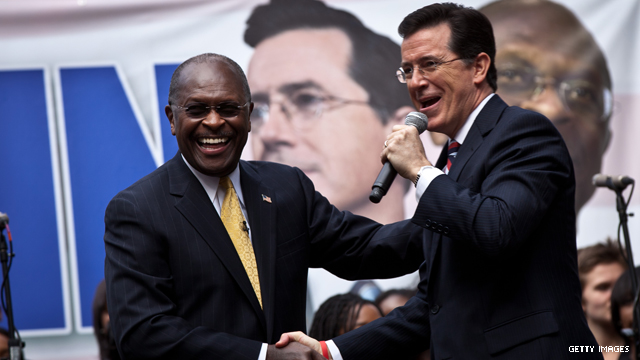 Colbert: Vote for Cain, he's on the ballot

"I came here to praise one man, one 'Her-man'," Colbert said. "Herman Cain is an outsider. In fact he is such an outsider, he's not even running for president anymore."

Cain suspended his campaign in December amid allegations of sexual misconduct after he had already secured a spot in the Palmetto State primary.

But without much luck getting his name in the running (he missed the November filing deadline and the state does not permit write-in ballots) Colbert on Saturday urged supporters to throw their support behind Cain in his stead.

"I want you to vote for Herman Cain, because Herman Cain is me," Colbert said. "He believes in hard work, the power of free markets, and he possesses the one thing I don't think I will ever have: a place on the South Carolina primary ballot."

Accepting Colbert's praise, the former Godfather's Pizza executive said he was thrilled when the comedian asked him to be part of the event.

Thousands of young people flocked to the campus of the College of Charleston for the rally, which included a marching band and a choir on stage.

Stacey Hanchuck, an independent voter, said she plans to cast her ballot for Cain.

"In a roundabout way, we're voting for Stephen Colbert 2017," she said, holding a homemade Colbert poster.

Because South Carolina has an open primary, any registered voter, including Democrats and independents, can cast a ballot.

Hanchuck's friend, Brian Fisher, said he hopes Cain does well at the polls.

"I think it would send a message that people are just tired of the candidates we've been getting, that no clear leader stands out," Fisher said.

The satire-filled rally marked the second anniversary of the controversial Citizens United Supreme Court decision that allowed for the creation of super PACS, independent groups allowed to raise and spend unlimited amounts of money on candidates as long as they don't coordinate with the campaigns.

And while Colbert drew plenty of laughs satirizing the Supreme Court ruling-the comedian has created his own super PAC called "Americans for a Better Tomorrow, Tomorrow"–it was no laughing matter for Cammy Kennedy.

"The more votes Stephen Colbert or Herman Cain can get the stronger the statement it will make that I was willing to take time on Saturday to go to the polls and vote for someone who is never going to get elected," said Kennedy, who described herself as "very liberal."

"But that's not what concerns me," she added. "It is more concerning to me that the super PACS are controlling the message that gets out to voters."