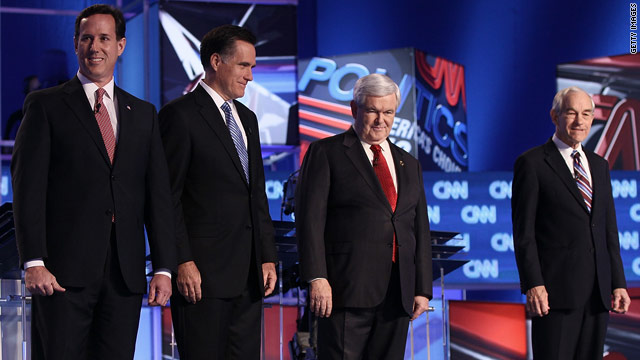 Evangelicals in SC: Not What You Think

Charleston, SC (CNN) – Evangelicals may be the most mentioned Republican voter group in the 2012 campaign.

But in South Carolina, evangelicals say they are mislabeled, misunderstood and that they are not the single-candidate or single-issue voters many believe.

Listen to our podcast, focused on busting political myths, here. Or keep reading.

"We've got a lot of evangelicals or believers that are with Santorum, that are with Newt [Gingrich], that are with Ron [Paul], they're all over the place," said Patrick Haddon, a 34-year-old self-described evangelical who is also the former chairman of the Republican Party in critical Greenville County.

"So why put everybody together in a lump sum together, when they're not?" he asked.

Haddon, who is an organic farmer, says he is tired of reporters and politicians branding "evangelicals" as one monolithic group. Or a one-issue group that only cares about abortion.

"I mean the life issue's number one," he said, but "taxes is right there nipping on the heels of pro-life."

Haddon is one of many religious conservatives who see the national debt, tax reform, the size of government and foreign policy issues as critical and Christian issues.

Academics in the state agree.

"I think we mislabel evangelicals so often," said Carl Evans, a professor emeritus at the University of South Carolina who specializes in religious studies. "Some of them are very progressive on social and political issues. Some, most, are very moderate or even quite conservative. But to lump them all together as if we have a block vote, is a mistake."

Adding to the discussion is the fact that all of the current Republican presidential candidates are pro-life.

So evangelicals like Mary Wood are making their choices based on other issues. Wood is a recent Clemson graduate who used to head the school's anti-abortion group "Students for Life".

"We're all pro-life and we see that all these (candidates) are pro-life, but we debate about the war and the economy and the best recovery plan and amnesty," the petite brunette said. "We are stereotyped unfortunately that (abortion) is all we care about."

Another stereotype Wood wants to clear up? That evangelicals are venomous toward those outside of their beliefs.

"I feel like they assume I'm very judgmental," she confided, "that I'm very closed-minded… and that I hate everyone else who doesn't agree with me."

She and Haddon both admitted there are some evangelicals who may fit those stereotypes but insist that is far from the norm.

Both describe their faith as something they want to share by example, not by beating people down.

And when it comes to politics, both say evangelicals may vote with their beliefs but they are not voting as a group.

"Me," Haddon said, pointing to his chest, "I will vote and I will support the guy who lines up with me."

Listen to how else Haddon and Wood defy stereotypes in our mythbusting podcast this week here.