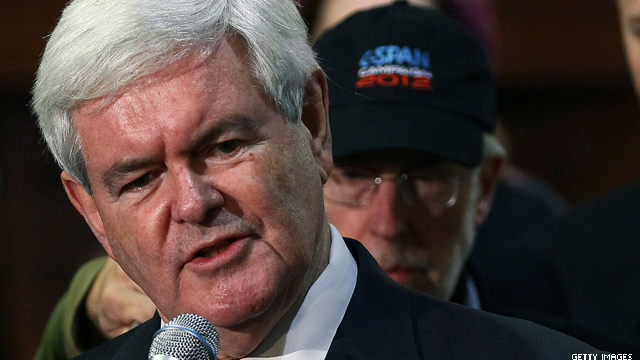 Gingrich: I would lose to Obama in a personality contest

(CNN) – While Newt Gingrich insisted on Friday he would be the best candidate to compete with President Barack Obama in November, he added there was one match in which he would lose against the president.

“He’s likeable. I would never beat Obama in a personality contest,” Gingrich said on CNN’s “Erin Burnett OutFront.” “But the presidency is not about likeability. The presidency is about are you capable of doing the job?”

In the interview, Gingrich also argued the recent controversy over his marriage history helps him connect with voters, claiming the timing of a new ABC News interview with his ex-wife has fueled supporters to rally around the candidate.

“I don't believe anybody who's going to vote tomorrow didn't already know I've been divorced and married,” Gingrich said. “It's all been out there for months. It was a sense of 'But why would ABC bring it up now?’”

The former House speaker received a standing ovation after he forcefully chided CNN for bringing up the interview in the first round of questions at the Republican presidential debate Thursday night.

He said South Carolina voters on Friday thanked him for attacking the media, with some supporters telling him he was “in their prayers.”

While Gingrich said presidential candidates should be prepared for conversations that are “amazingly detailed and amazingly open,” he said voters should not focus on his past, but the person he is today.

“Look at who I am now. Look at how close Callista and I are as a couple,” he said.