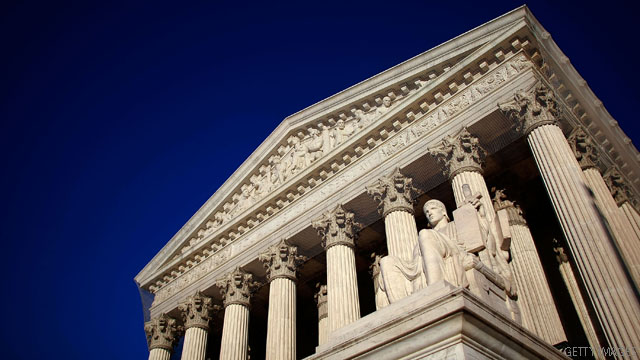 Washington (CNN) - The U.S. Supreme Court has tossed out the Texas redistricting map for congressional and legislative seats drawn up a federal court, giving a partial victory to Republican lawmakers.

In an unsigned opinion issued just 11 days after holding oral arguments, the justices said a revised map that differed greatly from the one created by the Legislature used ambiguous standards.

"To the extent the (federal) District Court exceeded its mission to draw interim maps that do not violate the Constitution or the Voting Rights Act, and substituted its own concept of 'the collective public good' for the Texas Legislature's determination of which policies serve 'the interests of the citizens of Texas,' the (district) court erred," said the Supreme Court ruling Friday.

At issue are competing maps for the Texas Legislature and Congress - created first by Republican lawmakers that favored their political base and later by a federal judicial panel to give minorities greater voting power.

The court-drawn map was imposed after Democrats and minority groups in Texas challenged the original plan approved by the GOP-led Legislature.

The political stakes are huge: Texas gains four new congressional seats based on the newly completed census, and an expected high court ruling in coming weeks could help determine if Democrats can wrest control of the House of Representatives from the Republicans.

The legal stakes are just as important - creating standards courts must use when evaluating voting boundaries. This is the latest election-related dispute for the justices this year. Continuing, separate challenges to campaign spending laws and state voter identification laws will soon be presented to the court.

A federal court in San Antonio scheduled a February 1 hearing in response to the Supreme Court's decision, after which Texas' attorney general filed a motion urging swifter action in order to prevent a delay in primary elections scheduled for April 3.

According to a press release from state Attorney General Greg Abbott's office, February 1 is the "very latest" for a new redistricting map to be in place, for the primary to be held on time. The release claimed that "it does not appear that the court anticipates entering new interim redistricting plans by that date."

"In order to preserve the unified April 3, 2012, primary election date agreed to by the state's major political parties and ordered by this court, defendants respectfully request that this court ... enter an expedited scheduling order that will allow for entry of new interim redistricting plans by January 30, 2012," the attorney general's office said in its motion.