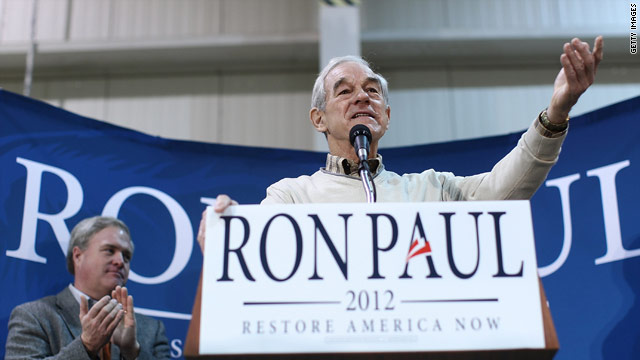 Charleston, South Carolina (CNN) - At the second stop on what his campaign is calling a "Whistle Stop" tour of South Carolina, Ron Paul addressed a crowd of 50 or so supporters in a vast airport hangar here at the Charleston Air Force Base.

Telling the friendly crowd that his campaign is doing something "a lot different than what the other candidates are doing" by focusing on a strict interpretation of the constitution, Paul said his message is really starting to resonate.

"A lot of people do identify me with another generation, the younger generation who's so enthusiastic about the things that we've been talking about in going back to the constitution," Paul said. "So this to me is very encouraging because the growth of the freedom movement is getting to be exponential. It was very, very slow for a long time."

One notable member of that younger generation came up to express his support for Paul after the event. Landon Sanford, the son of former South Carolina Governor Mark Sanford, stopped Paul as he was shaking hands on his way out to pass along a message from his father.

"Just wanted to let you know my dad fully supports you," the younger Sanford said of his father, who served alongside Paul as a congressman from the Charleston area in the late 1990's. "He can't really say it because of Fox, and he wanted me to tell you he enjoyed working with you very much."

(Sanford is a paid commentator for Fox News.)

Having served in Congress since the 1970's, Paul said he feels like the constitution is something that isn't taken too seriously in Washington, but he didn't place the blame entirely on his Congressional colleagues.

"In Washington there's very little concern about following strictly the constitution," Paul said. "Some of it is carelessness, some of them don't like the constitution's restraints, but a lot of it is a consequence of educational system over many, many decades, because too often our young people have been taught that our constitution is something that should not be overly rigid. Well why shouldn't it be overly rigid? What good is a law if it's not rigid?"