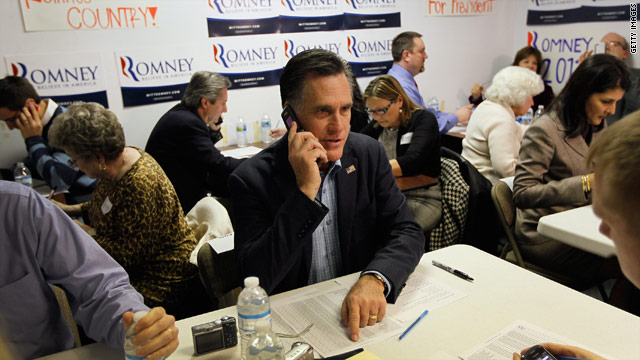 Charleston, South Carolina (CNN) - With Newt Gingrich creeping up in the polls and potentially on the cusp of a South Carolina victory, one of Mitt Romney's senior advisers sought to change expectations ahead of Saturdays' pivotal presidential primary.

Though his campaign has competed aggressively in the state and is hungry for a win here, Romney strategist Stuart Stevens said the idea of a loss to Gingrich on Saturday is not far-fetched.

"Do I think we could lose South Carolina? Sure. Of course," Stevens told CNN after Thursday's presidential debate in Charleston.

"The very idea that we are sitting where we are two days before South Carolina, having won New Hampshire, having done very well in Iowa, and the question is 'Could Romney lose South Carolina,' is such an absurd question."

"The idea should be does he have a chance in South Carolina," Stevens claimed.

When it was noted that Romney had a 10-point lead over Gingrich as recently as Tuesday, Stevens shook his head.

"These things were always going to be close," he said. "I think it's very competitive. I think it's a four-way race. The whole race is very fluid."

Romney and Gingrich are now essentially battling one-on-one down the stretch, with Rick Santorum in third place.

"It's tight, it's real tight," said one Romney adviser who did not want to be quoted discussing internal poll numbers.

One trend has emerged in Romney's internal polling: a sharp gender gap between the two frontrunners.

Romney is holding onto a robust lead over Gingrich among female voters, but the flip side is also true - Gingrich is beating Romney among men.

A second place finish by the former Massachusetts governor in South Carolina would unquestionably be a disappointment for a campaign that was confident and riding high just last week after a decisive Romney victory in New Hampshire.

Romney has traveled around South Carolina with Gov. Nikki Haley at his side for two weeks, and the campaign has spent heavily on television, radio, mail and phone calls to targeted voters.

Another leading Romney surrogate, state treasurer Curtis Loftis, did not seem so confident at a campaign event on Friday.

"It has been a hard week," Loftis said at a rally in Gilbert. "Nobody is gonna deny that."

There are other signs that the Romney team is anxious.

The campaign added an extra campaign event in Greenville on Friday night - a late effort to hold down Gingrich's and Santorum's margins in the socially conservative and evangelical-heavy upstate.

Romney, meanwhile, is hoping to bank most of his votes along the more moderate coast, where the fiscal and military issues that Romney prefers to talk about on the stump predominate.

Behind the scenes, Romney advisers in Boston have been scrambling this week to halt Gingrich's renewed momentum.

After Gingrich shot up in the polls after Monday's debate in Myrtle Beach, the Romney campaign swiftly sharpened their attacks on Gingrich and arranged a series of conference calls with reporters to challenge the former House speaker's judgment and discipline.

Meanwhile, Missi Sousa, a staffer in Romney's political shop in Boston, blasted out a message Wednesday to campaign backers nationwide urging them to call into South Carolina and "turn out Mitt's supporters."

"Please get the word out to your personal networks," Sousa wrote in the email, provided to CNN by a Romney supporter in Columbia. "This is all hands on deck."

But the Romney entreaties were rebuffed, multiple sources told CNN, and many of those Huntsman backers publicly endorsed Gingrich instead on Thursday.

Some of that movement can be attributed to veteran GOP strategist Richard Quinn, who worked for Huntsman but signed on with the Gingrich campaign on Thursday to assist with the final South Carolina push.