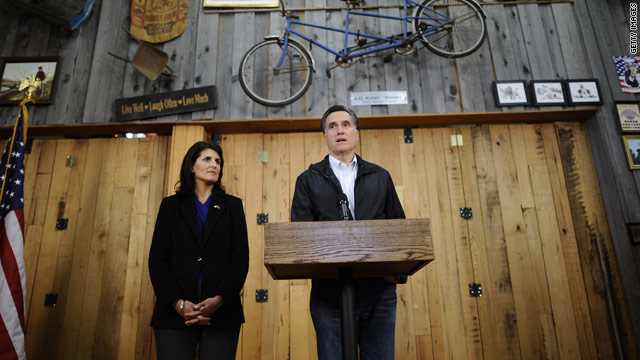 Gilbert, South Carolina (CNN) - Mitt Romney opened up a new line of attack against his main South Carolina rival Newt Gingrich Friday, calling on the former speaker to release the full report from the ethics investigation that led to his downfall in Congress.

"You know it's going to get out before the general election. He ought to get it out now," Romney said on Friday.

Gingrich was reprimanded by the House and ordered to pay a $300,000 penalty in 1997 for violating an ethics rule. The episode marked the first time in the nation's history a speaker was penalized by Congress.

"I wouldn't release things piecemeal. Do it all at once," he told reporters after an event in Gilbert, South Carolina.

A Gingrich spokesman brushed off the attack and said the report is already available to read online.

"Mitt should go to Thomas at the Library of Congress website and search 'already been released' and read the report in the Congressional record," R.C. Hammond said.

The report appears on the Library of Congress web site as well as the website of the House Ethics Committee.

Romney's communications director said the governor was calling on Gingrich to release underlying documents he had provided to the ethics committee during the investigation.

"Given Speaker Gingrich's newfound interest in disclosure and transparency, and his concern about an 'October surprise,' he should authorize the release of the complete record of the ethics proceedings against him," Gail Gitcho said.

The former Massachusetts governor recently faced disclosure questions of his own, as reporters pressed him on his varying responses on when he would release his tax records.

"I've indicated that I will release my tax returns. I'll do so when they're prepared which would be April, first, middle part of April and then they'll all come out at one time," Romney said.

He added that there would be multiple returns released.

"There will be more than one year. I don't know the exact number," Romney said.

"The people of South Carolina are not talking about tax returns," Haley said.

"I've heard more people wondering about why you people aren't asking about ethics reports and ethics problems with the Gingrich campaign and nobody is talking about tax returns," Haley added.

Romney brushed off the boos he received during Thursday's CNN debate when he suggested that releasing his returns would provide ammunition to his opponents.

"So different campaigns cheer and boo different people based upon the interest of their campaign," Romney said.

Romney dismissed the notion that he mishandled the issue.

"I can't possibly tell you that everything I do in a campaign is perfect," Romney said.

The GOP frontrunner appeared to downplay expectations ahead of Saturday's primary, noting Gingrich's regional advantage as a southerner.

"Speaker Gingrich is from a neighboring state, well-known, popular in the state. And so I knew we'd have a long road ahead of us," Romney said.

"And frankly to be in a neck-and-neck race at this last moment is kind of exciting," he added.

The former Massachusetts governor acknowledged he may not be able wrap up the nomination as quickly as many pundits once predicted.

"We're gonna go on for a long race and I think I've got the staying power and a message that I think connects with people."