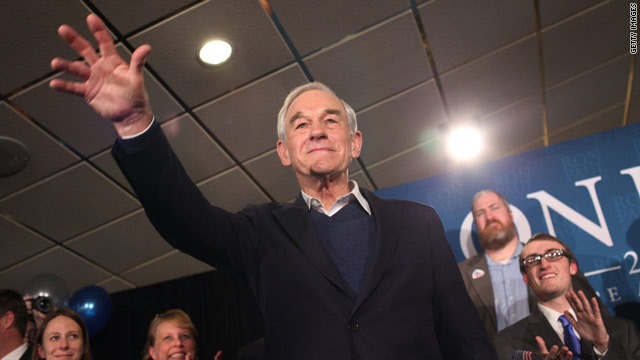 Charleston, South Carolina (CNN) - Florida may follow the Palmetto State in the primary and caucus calendar, but Rep. Ron Paul is looking ahead.

The Paul campaign formally announced Friday that the longtime congressman from Texas is going to go up with ads on broadcast and cable television in Nevada and Minnesota, the two contests that follow Florida. A top Paul aide first told CNN about the new ad buys on Thursday night following a CNN-Southern Republican presidential debate, and described the ad buy as significant in size.

The campaign says this is their fourth ad buy in Nevada and their first in Minnesota.

"Running ads in the key early voting states of Nevada and Minnesota is part of our delegate strategy to secure the Republican nomination. Both states present opportunities for a strong top-three showing in their upcoming caucuses," said Ron Paul 2012 National Campaign Chairman Jesse Benton, in a statement. "Ours is the only campaign with the resources, organization, and stamina to defeat establishment candidate Mitt Romney in a 50-state race."

While Paul will campaign in Florida, a top aide to the congressman tells CNN they won't go up with TV commercials in the Sunshine State. With its multiple and more costly markets, Florida is a more expensive state to run campaign ads than either Nevada or Minnesota. Paul finished third in Iowa's January 3 caucuses and a strong second in New Hampshire's January 10 primary.