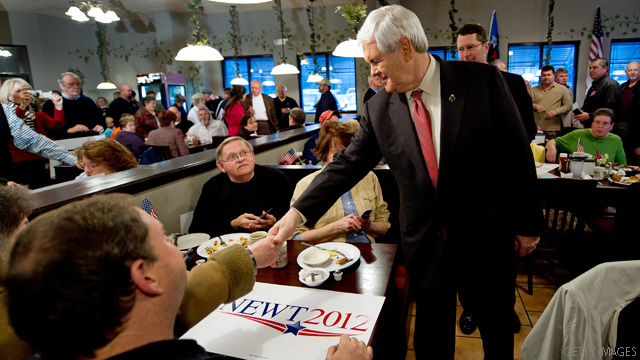 The survey was conducted Thursday and Friday, half before and half after Thursday night's explosive CNN-Southern Republican presidential debate in Charleston, South Carolina.

The ARG poll indicates that Gingrich has jumped seven points and Romney's dropped six points since their last survey, which was conducted Tuesday and Wednesday. At that time, both men were basically all tied up, with Gingrich at 33% and Romney at 32%.

According to the new poll, Gingrich leads Romney 47%-24% among self-identified Republicans, with Paul and Santorum each at 14%. Among independent voters and Democrats, Paul's at 33%, Romney 32%, Gingrich 18% and Santorum 10%. South Carolina holds an open primary, which means independents and even Democrats are allowed to cast ballots.

The survey indicates that Gingrich grabs about half the vote among self-described tea party movement supporters, far ahead of the rest of the field. Among those who say they are not tea party supporters, Gingrich is at 33%, Romney 31%, Paul 22% and Santorum 11%.

Gingrich leads Romney among men 38% to 25%, followed by Paul with 21% and Santorum at 13%. Among women, Gingrich leads Romney 42% to 26%, followed by Paul with 16%, and Santorum with 13%. That number may be surprising, following the broadcast Thursday night of an allegation from Gingrich's ex-wife, Marianne, that the former House speaker offered her a choice of an open marriage or divorce when he revealed to her he was having an affair with the woman he later made his third wife.

Gingrich said the claim by his second wife was false, but the story made major headlines, and an angry Gingrich chastised CNN for starting off Thursday night's debate with a question about his ex-wife's allegations. Gingrich's response elicited a standing ovation from the audience.

The American Research Group poll was conducted by telephone, with 600 likely South Carolina GOP primary voters questioned by telephone. The survey's sampling error is plus or minus four percentage points.