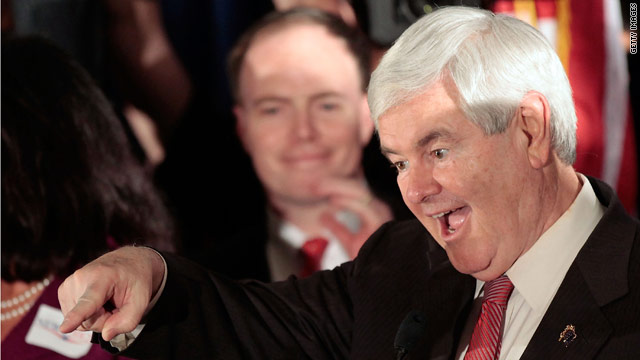 He swept the Palmetto State by wooing many voters with strong debate performances, but the former House speaker told the 500-strong crowd that people are missing the reason behind his momentum.

"People actually misunderstand what's going on. It's not that I am a good debater. It is that I know how to articulate the deepest-felt values of the American people," he said.

He described what he thought led to standing ovations during the Myrtle Beach and Charleston debates this week.

"So many people who are so concerned about jobs, about medical costs, about the everyday parts of life and who feel that the elites in Washington and New York have no understanding, no care, no concern, no reliability, and in fact do not represent them at all.

"The American people feel that they have elites who have been trying for half a century to force us to quit being American and become some kind of other system," he said.

Gingrich announced a new campaign slogan as he prepares to compete in Florida against former Massachusetts Gov. Mitt Romney.

"We believe as our new sign - which just got made today points out - that if we unleash the American people, we can rebuild the America that we love," he said.