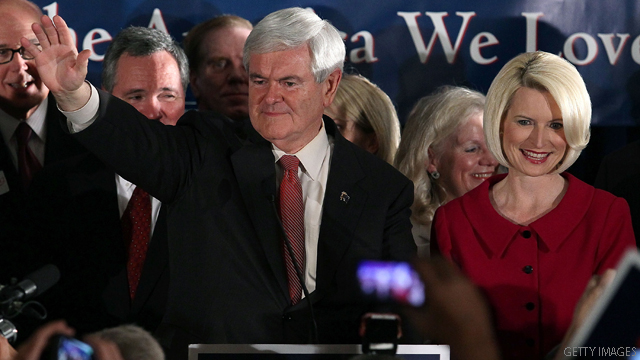 (CNN) - Polling is open in the Palmetto State Saturday as voters kick off the third round of the Republican presidential nomination. Check back here for updates from our reporters and producers throughout the first-in-the-South primary state of South Carolina. Tune in live at 6 p.m. ET for CNN's live special coverage and follow real-times results at CNNPolitics.com and on Twitter at #cnnelections. Read more here.

9:43 p.m. ET - @alexcast: oh no. news media will try to destroy Ging this week for this food stamp pres/anti-elite-newsmedia riff. that will be jet fuel for him.

9:42 p.m. ET - @adamplevycnn: Florida – 50 delegates. Winner take all. Get ready for a southern brawl. #CNNDebate moderated by @wolfblitzercnn on Thursday will be great.

9:39 p.m. ET - @alexcast: newt message: my opponents are fine but you know they are not the big leader you need. powerful

9:37 p.m. ET - Gingrich said if he becomes the GOP nominee, he will challenge Obama to seven three-hour debates.

"I have already conceded he can use a teleprompter if he wants to," Gingrich added.

9:34 p.m. ET - Gingrich issued praise on his three rivals, saying "the four of us are proof you can come from a wide range of backgrounds."

9:30 p.m. ET - After taking the stage at his campaign headquarters in Columbia, South Carolina, Gingrich told the crowd that the two recent debates in South Carolina prove the "American people feel that they have elites who have been trying for a half century to quit being American."

"It's not that I'm a great debater ... I articulate the deepest held values of the American people," Gingrich said.

9:13 p.m. ET - @CNNExpress: Let's take the bus!!! “@mattyhoyeCNN: @psteinhauserCNN – Does this mean we might go back to Puerto Rico and Hawaii for their primaries? :)”

"Rick Perry, certainly on what could have been a bad day for Newt Gingrich, helped it become a really good day and put a lot of conservative gas in his tank ... A lot of dominoes went, but I think Newt would tell you that was a pretty good size domino that morning at 11 o'clock," Dawson said.

8:37 p.m. ET - Santorum took the stage at his campaign headquarters in Charleston, SC, flanked by his sons, all donning his now infamous sweater vests.

8:35 p.m. ET - @alexcast: when economic house is on fire, people want a fireman and don't care so much where he slept last night. but they do want reliable one.

8:31 p.m. ET - @deirdrewalshcnn: Santorum supporters chanting "we pick Rick" as they await him to come out and address the crowd

8:27 p.m. ET - @PeterHambyCNN: Gingrich Spokesman R.C. Hammond: "Newt and Jeb are longtime email buddies. They talk all the time ... But there have been no conservations about an endorsement."

8:25 p.m. ET - @AriFleischer: Santorum's thought bubble: I can win this because Newt will blow up Romney, and Newt will also blow up Newt. That leaves me.

8:19 p.m. ET - @PeterHambyCNN received a statement from Rob Johnson, an adviser to Texas Gov. Perry, who dropped out of the GOP presidential race and endorsed Gingrich Thursday:

"Governor Perry congratulates Speaker Gingrich on his primary win in South Carolina. Newt is a conservative visionary who can transform our country. There is no question that Newt Gingrich has the heart of a conservative reformer and the ability to rally and captivate the conservative movement."

8:16 p.m. ET - Speaking to supporters in Columbia, South Carolina, Paul said "This is the beginning of a long, hard slog."

8:14 p.m. ET - @crowleyCNN: Per Romney campaign, Romney and Gingrich talked and had a "nice conversation."

8:07 p.m. ET - @crowleyCNN: Mitt in double barreled blast. Obama's never run a state or a business& GOP should not nominate someone who hasn't run a bizness or state

8:04 p.m. ET - @crowleyCNN: mitt: race "even more interesting" My mom uses "interesting" 4 anything she doesnt like Eg: like this dress, Mom? " It's interesting."

8:03 p.m. ET - Romney also took aim at Saturday's victor Gingrich, saying the GOP party cannot be run by someone who, like Obama, has never run a state or business. He said the Republican Party is the party of "free enterprise, and free markets and consumer choice," despite what his rivals say.

8:02 p.m. ET - @cwelchcnn: Computer problems with the electronic ballot system in Horry Co. SC. Not one ballot counted yet... pic.twitter.com/a4YFb0y1

8:01 p.m. ET - @alexcast: if florida gop is only 31% evangelical, then mitt should still win florida. but his weakness w/ conservatives is troubling.

8:00 p.m. ET - "We've still got a long way to go and tomorrow we're going to move onto Florida," Romney told supporters Saturday before launching into criticism of President Obama.

7:58 p.m. ET - Romney took the stage at his headquarters in Columbia, South Carolina and told the crowd that the race "is getting to be even more interesting."

"It's game on again and I can't be more excited," he said, adding that there was momentum behind Gingrich in the Palmetto State.

Santorum predicted a "long race" ahead that will be "the best thing that can happen for whoever the eventual nominee is."

7:45 p.m. ET - @streitfeldcnn: Ballots rolling into Charleston SC Board of Elections to be counted. #cnnelections yfrog.com/nv7a3bkj

7:44 p.m. ET - @sinderbrandcnn: The most important candidate quality for Republican voters today? Same answer they've given all year: Picking a candidate with the ability to beat President Obama. What's new is the candidate who has the advantage among voters who said picking a winner was their top priority: they gave Gingrich the edge over Romney in early exit polls.

7:35 p.m. ET - From Lexington County, South Carolina board of elections: Ballots are being dropped off in large boxes that are then carted into be counted by inmates from the Lexington County Department of Correction. They may not be able to vote, but they can help deliver them. (via CNN's Josh Rubin)

7:28 p.m. ET - Gingrich initiates a campaign "Moneybomb" over Twitter, asking supporters to help him deliver a "knockout punch in Florida."

7:26 p.m. ET - @David_Gergen: Newt isn't just winning becuz SC is conservative. He was the alpha male who rose up and seized the crown. A slugfest ahead.

7:22 p.m. ET - @sinderbrandcnn: Losing Newtmentum? Late deciders gave Newt Gingrich a 26-point edge over Romney – but that gap dropped by more than half among those who decided today, to 42-32, according to CNN exit polling.

7:18 p.m. ET - @sinderbrandcnn: An example endorsements don’t matter: Nikki Haley went all in for Romney, stumping with him across the state, and she had 66% approval among voters Saturday. So who did voters who approve of her back in early exit polls? Newt Gingrich, 40-33.

7:17 p.m. ET - @sinderbrandcnn: What women problem? Throughout the South Carolina race, a majority of women Republican voters supported Mitt Romney, while men backed Gingrich. The big question mark heading into tonight had been whether (or how much) Gingrich could expect that gender gap to widen. Instead, he virtually erased it. Gingrich, as expected won men handily, by a double-digit margin. But he won women too, by 5 points over Romney, 37 to 32%.

7:16 p.m. ET - @sinderbrandcnn: Fifty-seven percent of the voters in early exit polls Saturday said it’s very important that a candidate share their religious beliefs - and 46% of those voters backed Newt Gingrich. Romney came in a distant second, at 22%. For those voters who didn’t think shared religious beliefs were all that critical, Romney was the top pick, at 43%. Gingrich was second, at 29%.

7:15 p.m. ET - @streitfeldcnn: Rain picking up sharply in Charleston..polls are closed but the elex board still waiting for precinct results to be delivered by hand to HQ

7:06 p.m. ET - A Romney source told @crowleyCNN the campaign "will not be surprised" with a second place finish in South Carolina. They said the campaign will immediately pivot to Florida, the fourth state to vote on the road to the White House, where "we have a strong organization and big plans for next week."

On tap for next week? A "major" economic speech Tuesday, in which Romney will differentiate himself from Obama and Gingrich. He is also planning a reaction speech Wednesday morning to the president's Tuesday night State of the Union address, according to the source.

7:04 p.m. ET - @SamFeistCNN: #CNNElections: CNN is NOT calling SC at this time. After looking closely at the data, we are waiting for real votes.

7:00 p.m. ET - Polls closed in South Carolina at 7 p.m. ET, but CNN has yet to project a winner. According to exit polling, 38% of voters supported Gingrich, 29% backed Romney, 17% supported Santorum and 15% threw their backing to Paul.

6:54 p.m. ET - @YellinCNN: We're told Pres is at the White House, not watching s carolina returns. Maybe only person in politics not riveted by 2nite's outcome.

6:46 p.m. ET - @stevebruskCNN: Next: Romney and Santorum go to Florida for Sunday events, Gingrich returns to DC, Paul no events

6:41 p.m. ET - @HowardKurtz: Last Sunday everyone expected Romney to win SC. Now anything less than a big win will be seen as setback for Newt. #damnexpectationsgame

6:35 p.m. ET - @jimacostacnn: DNC Chair @DWStweets tells me don't read into her presence at Gingrich HQ. Asked why Gingrich may win, she pointed to Romney.

6:33 p.m. ET - @deirdrewalshcnn: At Santorum HQ at the Citadel Hootie and the Blowfish playing, appropo of the candidate who talks abt marriage, wedding just down the hall

6:32 p.m. ET - @BrookeBCNN: Fact: IF Gingrich wins tonight, it will be the FIRST time since 1980 that three different GOP candidates won IA, NH and SC. #CNNElections

6:30 p.m. ET - Thirty-seven percent of voters said they decided who to support in the last few days and 16% they made their final decision Saturday, according to CNN exit polling. Did the presidential debates impact voters' decisions? Eighty-eight percent said yes and 11% said no. There were two debates in the past week, including CNN's on Thursday.

6:27 p.m. ET - @JohnAvlon: Atmosphere at Romney HQ is like someone died right before a big party but the caterers still arrived.

6:00 p.m. ET - According to CNN exit polling: 64% of voters said they were born again or Evangelical Christians. Sixty-six percent said they support the tea party, 25% said they were neutral and 8% opposed the grassroots movement.

5:47 p.m. ET - @DanaBashCNN: At santorum hq. Aides say he's heading to florida tomorrow morning no matter what happens tonight and will continue on

4:53 p.m. ET - @EWErickson: Tonight South Carolina will bring us one step closer to Jeb Bush or Bobby Jindal or someone else saving the GOP from itself.

4:50 p.m. ET - @streitfeldcnn reports that Romney's campaign sent a cake on Saturday to Team Gingrich marking the 15th anniversary of Gingrich's formal reprimand by the House in 1997. See picture of the cake here, per Romney campaign source.

4:18 p.m. ET - @EWErickson: Prediction: After tonight, Romney backers within the GOP will be pulling out the stops to raise money for Rick Santorum to keep Newt down.

3:08 p.m. ET - @DanaBashCNN interviews precinct leader Ivy Wright-Coleman in Charleston, South Carolina. She has worked in the polls for 27 years and described the turnout as "moderate ... much higher in the past."

2:50 p.m. ET - @jimacostacnn: Torrential downpours in Columbia. My producer @mattyhoyeCNN and I counted six pile-ups on the roads in. #SCPrimary

2:30 p.m. ET - SPIN CYCLE? @tromney: Nothing like the glamorous life on the road pic.twitter.com/Xuj9b3H8

1:45 p.m. ET - Team Gingrich pointed out that Saturday is the 15th anniversary of Gingrich's formal reprimand by the House "ethical wrongdoing." The Hose voted on Jan. 21, 1997.