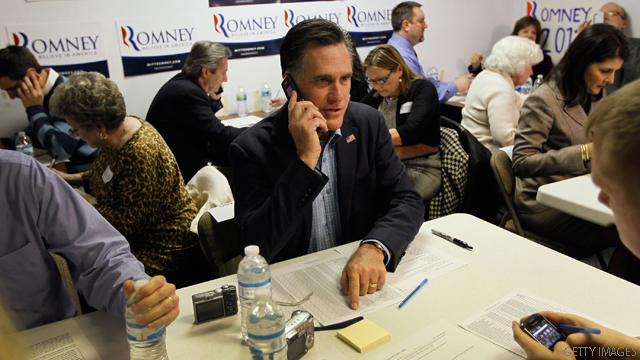 Phones in South Carolina rang incessantly (or annoyingly, depending on your view) throughout the week, as the presidential campaigns and their supporters auto-dialed Republicans across the state ahead of Saturday’s primary.

One Republican voter in Columbia, who did not want his name printed, arrived home late Friday to find eleven different political messages waiting on his answering machine.

For a flavor of what South Carolina voters were facing this week, the voter provided a recording of those calls to CNN.

Here’s a list, in order, of what showed up on his machine in the course of a just few hours on Friday:

1) A call from “Restore Our Future” – a super PAC supporting Mitt Romney – claiming that Newt Gingrich’s political “baggage” is “good for Obama, bad for America”

2) A call from Ron Paul’s campaign affirming his support for Israel (the recording says Paul wants the United States to be “friends with Israel, not her master”)

6) Yet another call from the Paul campaign accusing Gingrich of opposing “right-to-work” legislation and saying nice things about Andy Stern, the former president of the Service Employees International Union

7) A call from the Romney campaign that replays, almost in its entirely, an ad that Gingrich cut with Nancy Pelosi to promote at Al Gore-backed climate change campaign

8) A call from Tony Perkins, the head of the conservative Family Research Council, encouraging voters to look at a web site outlining the GOP candidates’ positions on various social issues

11) A call from the National Organization for Marriage attacking Paul, claiming he “would do nothing” to protect traditional marriage between a man and a woman