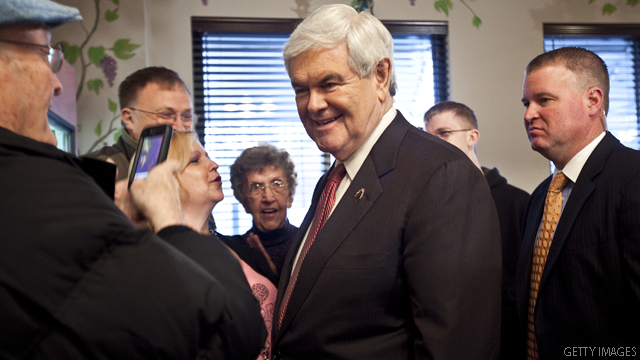 Columbia, South Carolina (CNN) - Newt Gingrich had all the momentum on Saturday as South Carolinians were voting in their state's Republican primary.

A poll released Saturday morning showed the former House speaker's surge over the last week carrying him past Mitt Romney, who had been the front-runner in the state all month. The American Research Group poll shows Gingrich leading Romney by a 40%-26% margin. ARG's last poll, released Thursday, showed a virtual tie with Gingrich at 33% and Romney at 32%.

It’s a big day for politics in South Carolina Saturday on CNN. Tune in at 4 p.m. ET to see the candidates debate the issues from Thursday night’s edge-of-your-seat debate then, at 6 p.m. ET, CNN’s special live coverage of the South Carolina primary begins. See the results as they come in on on CNN, CNN.com/Live and the CNN mobile apps.