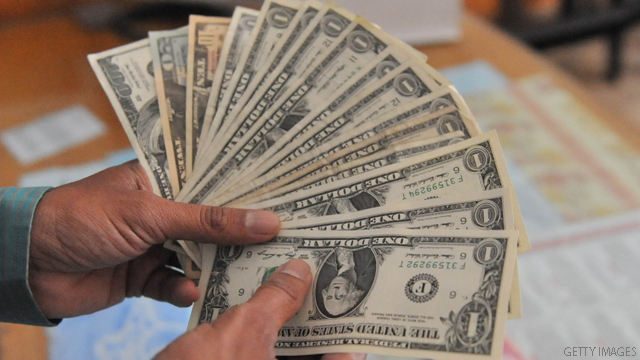 Just in the last week, Romney's Republican presidential campaign dished out $550,000 to run campaign commercials in the Palmetto State, more than any of his three remaining rivals for the GOP nomination, according to estimates by Campaign Media Analysis Group (CMAG), a company that tracks and estimates the costs of campaign ads running on the air.

And a Republican source familiar with ad buys in the state told CNN that the Romney campaign has spent $1.9 million total on the South Carolina airwaves, while a super PAC backing Romney has spent roughly $2.5 million.

"Winning Our Future," a super PAC supporting Gingrich, has spent $1.76 million – far less than the $3.4 million the group promised to shell out for a hard-edged ad attacking Romney's record at the private equity firm Bain Capital.

That controversial ad only ran for a few days.

The most recent week saw the heaviest spending. The CMAG numbers indicate that Rep. Ron Paul of Texas shelled out more than $460,000 to run spots in the last week, with former Sen. Rick Santorum of Pennsylvania spending more than $376,000 to put up ads on TV.

Gingrich, the former House speaker, has surged in the most recent public opinion surveys, but his campaign's only spent $162,000 to run ads this week. That's about $60,000 less than Texas Gov. Rick Perry dished out to air commercials in the same time period. Perry dropped out of the race on Thursday and endorsed Gingrich.

But the ad spending by the campaigns is only half the story. The campaigns are getting a major boost from the independent super PACs that are supporting the candidates. And Romney seems to be the biggest recipient of the outside group spending.

The two super PACs backing Romney ("Restore Our Future" and "Citizens for a Working America") have spent more than $1.5 million over the past week to put up spots supporting the former Massachusetts governor and attacking his rivals.

Television ads began airing in South Carolina even before Iowa's January 3 caucuses, and started to hit with full force during the week of the New Hampshire's January 10 primary, as the campaigns and the super PACs began to lay groundwork in the Palmetto State for what was then shaping up to be the decisive contest of the GOP race.

The first-in-the-south-primary state is experiencing an avalanche of ads that voters in Iowa and New Hampshire largely escaped.

"Iowa got heavy late with only some candidates and groups engaged and New Hampshire never really was heavily targeted," said Ken Goldstein, CMAG president and CNN's consultant on TV advertising.

"South Carolina is being targeted at absolutely the highest levels, not only are each of the candidates advertising, but each of their super PACs are advertising as well. It looks like what one would see if a Midwestern presidential battleground market in late October that also had a Senate race."