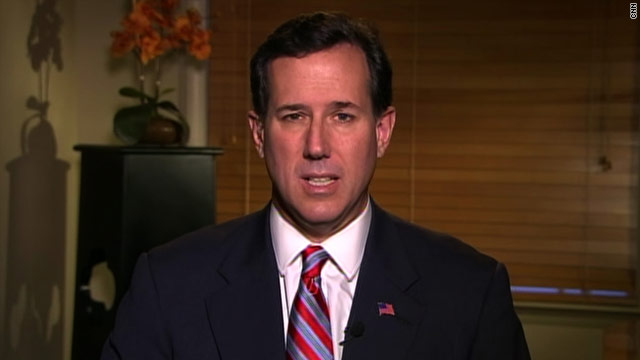 (CNN) – He may have finished third in the South Carolina primary, but Republican presidential hopeful Rick Santorum didn't sound like a loser on Sunday.

While conceding this round to former House Speaker Newt Gingrich, who bested Santorum by 23 points in Saturday's Palmetto State voting, the former Pennsylvania senator suggested Gingrich had South Carolina sewn up, and the real contests are still to come.

"South Carolina was, I wouldn't say in the oven and well-cooked, but it was pretty well cooked" for Gingrich, Santorum said on CNN's "State of the Union." "Newt had done a great job planting his flag here, spending an enormous amount of resources here and doing a very good job and making this his make-or-break state."

This race is in one way unprecedented in modern GOP history: three different candidates won each of the first three states, with Romney earning his expected victory in New Hampshire, and Santorum eventually edging out Romney in the Iowa caucuses.

Santorum said having three different winners so far dealt a serious blow to any notion that Romney, the former Massachusetts governor, was certain to emerge as the Republican presidential nominee.

In particular, he said the victories by both himself and Gingrich showed that conservatives were flexing their muscles in the primary process.

"This idea that Mitt Romney is not going to be able to be defeated unless conservatives coalesce, well. it's objectively false," Santorum told Chief Political Correspondent Candy Crowley. "I said to Newt when I talked to him last night, this may be a two-person race, but the two people may be on the phone together."

The former Pennsylvania senator said earlier this week that regardless of the South Carolina vote, he would soldier on to the next contest on January 31 in Florida, where his campaign began airing advertisements on Saturday.

Santorum has watched the field of competitors winnow rapidly since the Iowa caucuses, including the demise of two candidates – Texas Gov. Rick Perry and Minnesota Rep. Michele Bachmann – once in contention for the block of conservative voters he needs to overcome Romney. He made no of Texas Rep. Ron Paul, or how the libertarian champion running strong with younger Republican voters fits into the race.

"I think the more focus as we now have gotten down to three serious candidates, the less attractive I think Newt is going to be, and the better alternative we are," he said. "So our feeling is that this is a three-person race, and the conservatives are polling better than Gov. Romney is, and the real conservative is yet to emerge, and that's me."

Santorum pointed to his economic plan as a distinction between the three, arguing that his plan to spur blue-collar hiring "is really focused on getting the folks that we need to win this election back to work."

"If you look at Newt Gingrich's plan, it is right out of the Club for Growth and Wall Street, his economic plan" he said. "And if you look at Mitt Romney's, it's out of the moderate establishment muddle, it's not transformational change."

Ron Paul says he's on the hunt for convention delegates