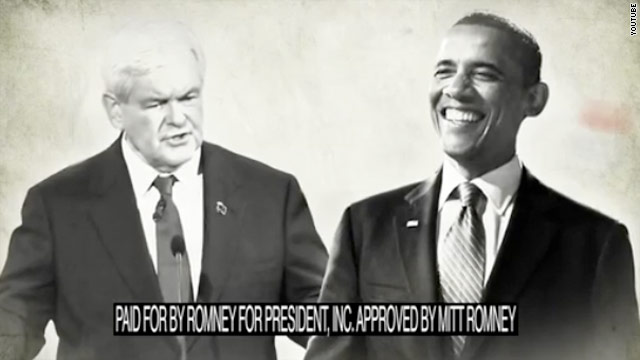 Romney out with biting ad against Gingrich

"If Newt wins, this guy would be very happy," the ad's narrator says, as a photo of a smiling President Barack Obama appears on screen.

The 30-second commercial, "Florida Families," is set to air statewide in Florida.

In a part of the country that saw large amounts of home foreclosures, the ad particularly strikes Gingrich over his time as a consultant at mortgage giant Freddie Mac.

"While Florida families lost everything in the housing crisis, Newt Gingrich cashed in," the narrator says.

Gingrich worked as a consultant for Freddie Mac during two different time periods, in which his company received more than $1.6 million.

While his opponents claim he worked as a lobbyist, Gingrich insists he did no lobbying of any kind. On Monday, he said his campaign was working with his former firm to release records of the consulting contract.

But Romney's new ad zeroes in on Gingrich as a lobbyist and Washington insider.

The spot features footage of Gingrich speaking about his Freddie Mac history: "I offered advice. And my advice as a historian…"

The ad, citing Gingrich's $300,000 penalty to a House committee in 1997 for an ethics violation, blasts the former speaker as being "sanctioned for ethics."

"Gingrich resigned from Congress in disgrace," the narrator says, echoing a new line of attack Romney unleashed on the campaign trail on Sunday.

The former speaker maintains the fine was a "reimbursement," not a penalty, for the cost of the investigation.