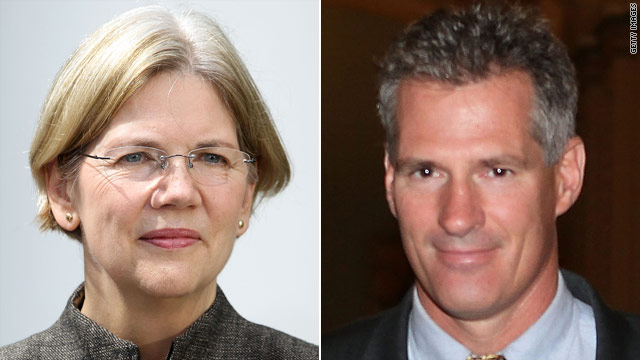 Senate candidates to super PACs: Stay out of it

(CNN) – In an unusual step to halt the surging force of super PAC spending, Sen. Scott Brown and Elizabeth Warren on Monday jointly called on outside groups to stop pouring cash into their closely-watched Massachusetts Senate race.

"This is a great victory for the people of Massachusetts, and a bold statement that puts Super PACs and other third parties on notice that their interference in this race will not be tolerated," Brown said in a statement.

If a third party group airs any TV or radio ad supporting their candidacy or attacking their opponent, then the benefiting candidate will self-impose a penalty and pay 50% of the ad buy to a charity within three days.

For example, if a group supportive of Warren spends $60,000 on an ad, then Warren's campaign pledges to dish out $30,000 of its own cash. And in a world where money is the lifeline of politics every penny matters.

The campaigns also promised not to coordinate with any groups planning to launch "sham ads" that may arise during the course of the campaign.

Following a week of back-and-fourth letters, as well as private meetings between the campaigns, the two candidates formally signed the "People's Pledge" on Monday.

"With our joint agreement we have now moved beyond talk to real action to stop advertising from third party groups. But both campaigns will need to remain vigilant to ensure that outside groups do not try to circumvent what is an historic agreement," Warren said in a statement.

The contest between Brown and his likely Democratic challenger, Warren, has already turned into a heated race, with a barrage of independent groups injecting millions in ads to both promote and attack the candidates.

In the high-stakes race, conservative groups are fighting to keep the seat in Republican hands after it was wrested by Brown in a 2010 special election following the death of Sen. Ted Kennedy.

Democrats, meanwhile, hope to win back the seat with their high-profile candidate, a law professor most recently known for her role as a senior adviser to President Barack Obama in the development of the Consumer Financial Protection Bureau.

Super PACs are independent groups legally allowed to raise and spend unlimited amounts of money on a candidate, as long as they don't coordinate with the campaigns.

Since the landmark Supreme Court ruling in 2010 that paved the way for the emergence of super PACs, the groups have become a dominating force in the presidential race, flooding the Republican primary with millions in ad spending.

While the group hasn't spent any money on the race, its private arm, Crossroads GPS, has thrown money in the ring.

As a 501(c)(4) organization, Crossroads GPS is not required to disclose its donors, unlike public Super PACs.

But it lives by different rules in terms of advertising. It can spend money on ads promoting or opposing candidates, as long it also focuses on a specific issue or cause at the same time.

These ads are the most prevalent form of spending by outside groups, and critics of such advertising call them thinly disguised campaign commercials.

In the Senate race, for example, Crossroads GPS spent $1.12 million on what it called two "issue advocacy" television ads against Warren late last year. While the ads clearly attacked the Democratic candidate, they also focused on the need for job creation and targeted Occupy Wall Street, a movement supported by Warren.

Asked Monday if the group planned on abiding by the candidates' request, Crossroads sent a statement, saying there were plenty of loopholes in their pledge.

"Because the agreement allows union phone banks, direct mail, and get-out-the-vote drives – all union core specialties – Warren's latest agreement has loopholes the Teamsters could drive a truck though, the longshoremen could steer a ship through, the machinists could fit a plane through, and government unions could drive forklifts of paperwork through," said Steven Law, president and CEO of American Crossroads.

Meanwhile, in his statement on Monday, Brown singled out Rethink PAC and Bold Progressives as two pro-Warren groups that have spent money on the race.

Responding to the agreement, a spokesman from Rethink said it will "comply with (the) agreement between the two candidates" but added it still plans on educating voters about "the real Scott Brown record of working against Massachusetts' values."

"We will suspend our advertising campaign, provided other third parties do the same. Through our website … the news media, social media and other means of modern campaigning, we will provide factual analysis of the record that Brown is afraid to have exposed," the group's spokesman, Steve Crawford, said in a statement to CNN.