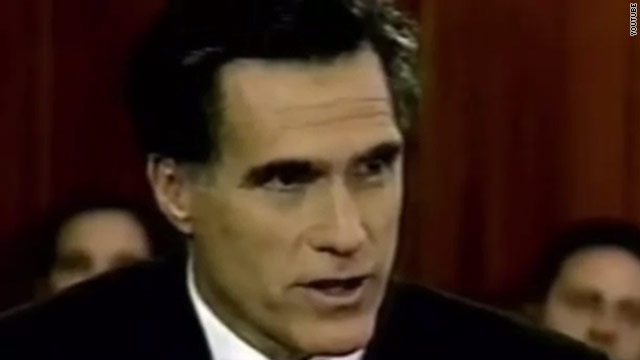 Washington (CNN) – Just as Mitt Romney and his allies are pouring millions of dollars into ads in Florida, a super PAC backing Newt Gingrich Tuesday waded in with a major ad buy of its own.

Winning Our Future bought $6 million in ads in the state beginning Tuesday, spokesman for the group, Rick Tyler, told CNN.

The buy came one day after major Republican donor Miriam Adelson contributed $5 million to the organization giving it a major financial boost.

The first ad of this buy went straight at Romney with an announcer saying "Think you know Mitt. Think again."

Its main line of attack tied Romney to the Massachusetts health care plan he put into effect as governor and linking it to President Obama's reform effort.

The ad featured a clip of Romney from an old "Meet the Press" appearance when he talks about "those who follow the path we pursued will find it is the best path and we will end up with a nation taking a mandate approach."

Romney has said he never intended his plan to be a national one, and that each state must make its own decisions.

The group highlighted how some of those who worked on Romney's blueprint later advised the White House on its health care overhaul.

The commercial also included a clip of Romney saying the President included in the national plan health care exchanges, where residents are able to buy health care and which were featured in Massachusetts, and "I am glad to hear that."

As it tries to link Romney and Obama, the ad several times featured Obama saying "I agree with Mitt Romney" as the President highlighted how Romney had previously said he was proud of the Massachusetts plan.

Also prominent in the ad was a clip of a 2002 interview Romney gave while he was running for Governor saying: "I am not a partisan Republican, that I am somebody who is moderate. My views are progressive." Those are words that don't play well in a Republican primary.

"Desperate to save his failing campaign Romney promises to repeal Obamacare. How can we trust him," the ad emphasized the former Massachusetts governor's previous changes in political position.

The Romney campaign pushed back by highlighting several of their their criticisms of Gingrich.

"Speaker Gingrich has demonstrated that he can’t tell the truth about his unprecedented ethics reprimand, his resignation in disgrace at the hands of his own party, and his work as a highly paid Washington lobbyist for Freddie Mac," Romney campaign spokesperson Ryan Williams said. "It’s not a surprise that his allies can’t tell the truth either.”

Money is expected to be a key factor in the lead-up to Tuesday's Florida primary because of the state's size and how television advertising is crucial in helping candidates get their message out to large parts of the population.