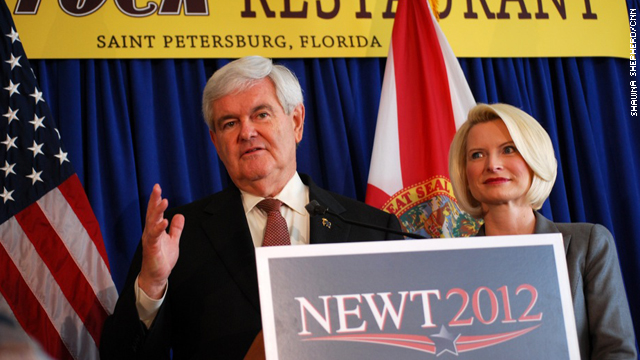 At a campaign stop in Tampa Monday and in St. Petersburg Tuesday, the former House speaker mentioned that several Mitt Romney aides worked for the popular Republican Florida governor-turned independent when he ran for Senate.

"We can make a very simple case: as governor of Massachusetts he was pro-abortion, pro gay rights, pro tax increase and pro gun control," Gingrich said of Romney. "Now that makes him a moderate in Massachusetts but it makes him pretty liberal in the Republican primary, which probably explains why he hired Charlie Crist's staff."

The former speaker is referring to Romney strategist Stuart Stevens, who according to his firm's website has advised Crist for more than a decade, and Press Secretary Andrea Saul and Amanda Henneberg, who both worked on Crist's failed 2009 Senate bid.

In December, with less than two months to go before the Jan. 31 primary, the former House speaker hired Rubio's Senate campaign manager, Jose Mallea, to be his Florida state director.

"This is absurd," Martinez said. "Mitt Romney endorsed Marco Rubio before Newt Gingrich did, and campaigned aggressively to make sure Marco Rubio defeated Charlie Crist. Besides, no one cares about past elections, they care about this one and defeating Barack Obama and restoring America. Floridians know Mitt Romney is the only conservative who can beat Barack Obama."

Gingrich is hoping to capitalize on his South Carolina win in Florida by pushing the message that he's the conservative anti-national GOP establishment candidate who can carry a decisive victory over President Barack Obama in a general election.

Mallea said it is fair to compare Gingrich and Romney nomination fight to the 2009 Florida Senate race.

"When [Crist] was falling from top, when he was the establishment candidate – well funded, everyone rallied around him, a moderate who took nuanced positions on everything, a good nice guy but just somebody that really didn't stand for anything," former Rubio aide Mallea said. "Once he started the fall because Rubio started surging – a principled conservative with true conservative values much like the speaker – once that started happening they had to resort to the politics of personal destruction."

Where Gingrich may be lacking in funds compared to his well-financed competitor he is hoping to make up for in enthusiasm and grassroots support throughout the Sunshine State.

The Gingrich campaign boasts of 14 paid staffers, seven campaign offices with two more expected to open, and as many as 5,000 volunteers spanning the state. Mallea told CNN he worked with many of the 140 grassroots chairs from each of the 67 counties on Rubio's Senate campaign.

"The ground swell is starting to build. And you saw it in South Carolina. Here, where we have a robust ground game as far as an organization, we're really going to be able to bank on that," Mallea said.

One Gingrich campaign official concedes that Romney may benefit from more than 200,000 Floridians who voted by absentee or early voting, whose ballots were cast before Gingrich picked up crushing momentum last week.

"The fact is, Governor Romney will have vastly more money than I will but we'll have many more people than he will. This is exactly what happened in South Carolina and people power beats money power every time," Gingrich said.