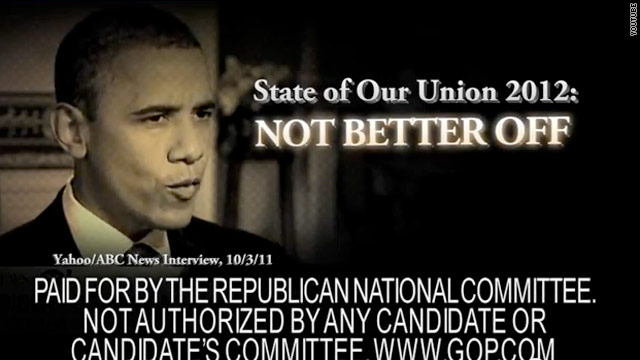 RNC ad takes on president over State of the Union

Washington (CNN) - Hours before President Barack Obama gives the State of the Union address, the Republican National Committee said it's going up with a television commercial that blames the president over the current state of the economy.

According to the RNC, the ad, titled "State of Our Union," will run Tuesday and Wednesday in the nation's capital, as well as in the key battleground states of North Carolina, Virginia, and Michigan.

The 30-second spot starts with Obama, saying in a February 2009 interview at the start of his presidency, "if I don't have this done in three years, then it's going to be a one year proposition."

The commercial also uses short snippets of former President Bill Clinton, in interviews, saying "49 million Americans living below the poverty line" and "things are not going in the right direction. They're going in the wrong direction."

The spot ends with a short excerpt of the president, from a recent interview, saying "I don't think they're better off than they were four years ago."

"Barack Obama has a lot of a explaining to do in tonight's State of the Union address," RNC Chairman Reince Priebus said in a statement touting the ad.

Responding to the ad, the Democratic National Committee said the commercial takes words by the president and former president out of context.

"The RNC is doing what it does best – misleading voters on the President's record to keep from talking about the GOP's plans to reinstate the same failed policies that drove this economy into recession," said DNC press secretary Melanie Roussell. "Instead of being honest, this ad takes the President Obama and President Clinton's words out of context to illustrate the same tired theme because they don't want to talk about what President Obama has actually accomplished."