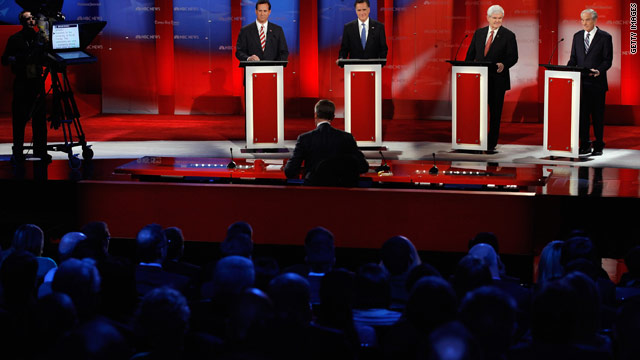 "It sounds like Newt Gingrich is running for pouter-in-chief," Romney strategist Eric Fehrnstrom said. He added a piece of historical context, noting the 2008 Commission on Presidential Debates, which organizes and regulates debates between the two general election candidates, prohibited audience participation.

"Is Newt saying he won't debate Barack Obama in a general election? That would be disastrous for our party," Fehrnstrom said.

Earlier Tuesday, Gingrich said he would protest if debate moderators require audiences to be silent. On Monday, Gingrich participated in an NBC News debate with the three other candidates in which the audience was nearly silent.

"I wish, in retrospect, I'd protested when Brian Williams took them out of the debate. It's wrong," Gingrich said on Fox News.

At the CNN Southern Republican Debate ahead of the South Carolina primary, many of Gingrich's responses drew long applause lines from the audience of Republicans. Other candidates also produced reaction from the audience, both positive and negative.

Gingrich said on Fox Tuesday the silent NBC debate was a reflection of the organizers' bias.

"I think he took them out because the media's terrified that the audience is going to side with the candidates against the debate," Gingrich said. "It's happened in every debate. We're going to serve notice on future debates that we're just not going to allow that to happen. That's wrong. The media doesn't control free speech, people ought to be allowed to applaud if they want it. It's almost silly."