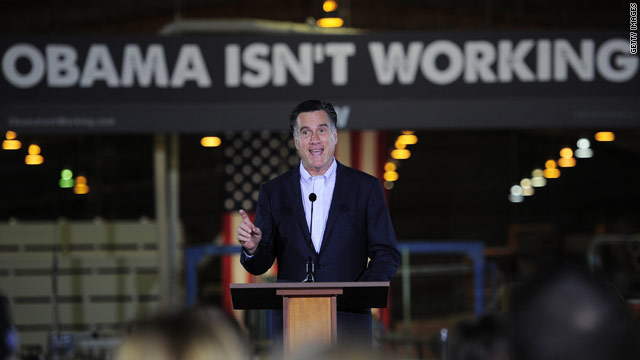 Tampa, Florida (CNN) - Keeping up his newly aggressive tone, Mitt Romney drubbed President Obama at a Tuesday event for amassing a "record of debt, decline and disappointment" in a fiery preemptive response on the eve of the president's State of the Union address.

In a formal speech to about 100 Floridians, Romney faulted Obama for failing to bring the unemployment rate under 8% and accused the president of "making these troubled times last longer."

"Tonight, the President will do what he does best. He will give a nice speech with a lot of memorable phrases," Romney said. "But he won't give you the hard numbers."

While campaigning in a state hard hit by the foreclosure crisis, Romney continued his characterization of Obama as a tax-and-spend president who made big promises but did not follow through.

The optics of the event underlined Romney's message. Reading from a teleprompter, he stood behind a podium in a cavernous former plant that has been shuttered in 2008. Behind him hung a banner that proclaimed: "Obama Isn't Working."

Romney likened the president's address to Congress to a campaign event.

"We'll also be treated to more divisive rhetoric from a desperate campaigner-in-chief," he said. "It's shameful for a President to use the State of the Union to divide our nation."

He charged the president would ignore the difficulties of average Americans in his speech, and said instead Obama would try to "take another victory lap" and present a picture of a "thriving" America.

"The unemployed don't get invitations to sit with the first lady," Romney said about the carefully planned invitations to watch the president's speech in Congress.

The Democratic National Committee said Romney was "distorting the president's record and vision" in the speech.

"Romney knows that unlike President Obama, who will focus tonight on laying out a blueprint for an America that's built to last and where hard work and responsibility are rewarded, he can't win by running on his own record," the DNC said in a statement. "That's because it turned out to be an absolute disaster for America's working and middle-class families."