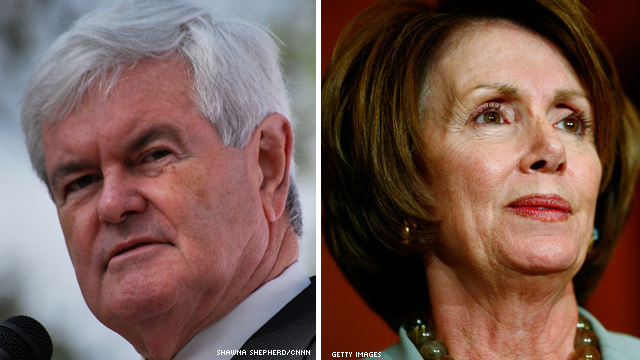 "She lives in a San Francisco environment of very strange fantasies and very strange understandings of reality," Gingrich said on NBC's "Today." "I have no idea what's in Nancy Pelosi's head."

"There's something I know, the Republicans, if they chose to nominate him, that's their prerogative. I don't even think that's going to happen," Pelosi warned.

Her comments set off a firestorm of speculation over whether Pelosi was implying she knew something about the candidate that could potentially damage his candidacy. The inflection in her voice, however, indicated she felt strongly that Gingrich was not qualified for the Oval Office.

Asked Wednesday morning about the interview, Gingrich said if Pelosi was hiding something she should name it.

"I have a simple challenge: Spit it out," Gingrich said.

Pelosi confirmed Wednesday that Pelosi was simply suggesting she believed Gingrich to be unelectable.

“Any reference I would make to the Ethics Committee is confined to the public record," Pelosi said in a statement.

Pelosi made headlines in December when she said in an interview that she had information on Gingrich that would be released "when the time's right."

Her office later clarified her remarks, saying Pelosi was referring to the public record on Gingrich's 1997 ethics violation in the House, the records of which are online.

The House minority leader's name is frequently used as an attack line against Gingrich on the campaign trail, with rivals blasting the former speaker for pairing up with Pelosi in a 2008 commercial urging the country to "take action" on climate change.

Gingrich has repeatedly described the commercial as "the dumbest" move he's made in recent years.