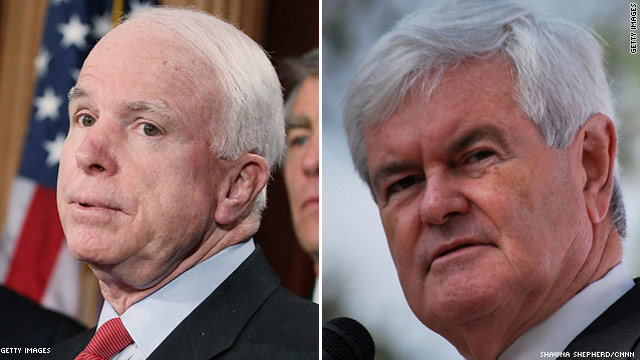 Washington (CNN) – Sen. John McCain tore into Newt Gingrich Wednesday, accusing the former House Speaker of encouraging an explosion of earmarks that ultimately led to corruption in congress and for having a leadership style that would be problematic as president.

"I saw these earmarks explode. I saw the corruption that resulted from it," the former Republican presidential nominee said on a conference call with reporters organized by Mitt Romney's campaign. McCain endorsed Romney after the Iowa caucuses.

McCain said earmarks "dramatically expanded on Newt Gingrich's watch," and cited a memo he said Gingrich wrote in 1996 directing lawmakers in charge of spending decisions to "consider elections" when doling out earmarks.

The former GOP presidential nominee has long been a critic of earmarks, money lawmakers direct to their home districts and states. McCain attacked former Senator Rick Santorum on the same issue when he became a threat to Romney earlier this month.

Though McCain said earmarks doubled on Gingrich's watch, he said he did not know off hand of any egregious pet projects Gingrich himself got for his constituents.

Steve Ellis with Taxpayers for Common Sense says it's hard to track that down, since lawmakers were not required to disclose their earmarks until 2007, long after Gingrich left Congress.

In Gingrich's defense, his campaign pointed to an independent analysis showing that during at least one of the four years he was speaker the number of earmarks dropped.

McCain's criticism of Gingrich was hardly limited to spending. He said publicly what many of Gingrich's former colleagues have told CNN privately over the past week – that Gingrich's leadership troubles as speaker mean he would be a bad choice for GOP presidential nominee.

"The fact is he was a failed speaker and was not sent back. He could not have been re elected as Speaker of the House and his leadership style was a major factor in giving him lack of support for re-election as speaker," said McCain.

McCain said he will be campaigning with Romney in Florida starting Friday though the weekend, after hitting the trail with Romney in New Hampshire and South Carolina before contests in those states earlier this month.

He revived one of his old jokes from his own 2008 presidential campaign, that when he was a "young, single naval aviator" in Florida he "contributed as much as I could to the local economy."
Four years ago Florida was the scene of the bloodiest battle between McCain and Romney when they were then competing against each other to be the 2008 GOP presidential nominee.

McCain went after Romney back then as someone who is too liberal and inconsistent to be the Republicans' pick for president.

"I think we should really give Gov. Romney credit…he is consistent. He has consistently taken both sides of any major issue, he has consistently flip-flopped on every issue," McCain said almost exactly four years ago, at a campaign stop in Jacksonville, Florida on January 28, 2008.

Now McCain argues Romney is the best person for these times, given the troubled economy and joblessness in America.

Still, McCain's differences with Romney were still on display during the call that was intended to be on Romney's behalf. McCain went after the Supreme Court's Citizens United decision, which critics say led to the flood of money into this year's campaign via so-called Super PACS.

That decision eviscerated the campaign finance law McCain sponsored with Russ Feingold, one of the Arizona senator's signature issues.

When asked about that on Wednesday's call with reporters, McCain tried to brush it off, saying the two will never agree on every issue, but said Romney is the best candidate to lead on what voters care most about this year, "jobs, the economy and national security."