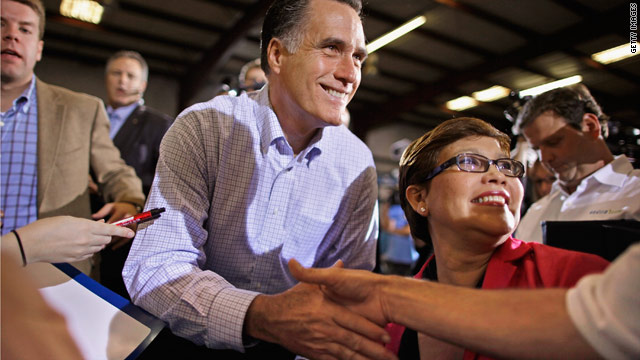 Poll: Romney stays in top spot in battle for Florida

Jacksonville, Florida (CNN) - With six days to go until Florida's Republican primary, a new poll indicates Mitt Romney remains on top of the field in the battle for the state's winner take all 50 delegates.

The survey was conducted Monday and Tuesday, after Gingrich's double digit victory over Romney in South Carolina's Republican primary, and half before and half after Monday night's GOP presidential debate in Tampa.

Prior to Monday's debate, the poll indicates Romney holding a 38%-34% margin over Gingrich. But looking only at Tuesday's results, after the debate, Romney led Gingrich 44% to 34%.

The ARG poll came out a few hours after a Quinnipiac University survey that was conducted Thursday through Monday that indicated a surge by Gingrich in Florida following his big win in South Carolina.

According to the ARG poll, 17% of primary voters say they have already voted by absentee ballot or early voting. Of this group, the survey indicates Romney leads Gingrich 51% to 39%.
Among the 83% who say they haven't voted yet, Romney holds a 39%-33% margin over Gingrich. As of last Wednesday, the Florida Department of State said that they had received 180,000 absentee ballots. Early voting began statewide on Saturday, and as of Sunday 53,000 people had voted.

Among self described tea party movement supporters, Gingrich leads Romney 47%-34%, with Romney leading Gingrich 47%-22% among those who said they were not tea party supporters. The survey indicates Gingrich and Romney tied among men, with Romney up 14 points over Gingrich among women.

The American Research Group poll was conducted January 23-24, with 600 likely Florida GOP primary voters questioned by telephone. The survey's overall sampling error is plus or minus four percentage points.