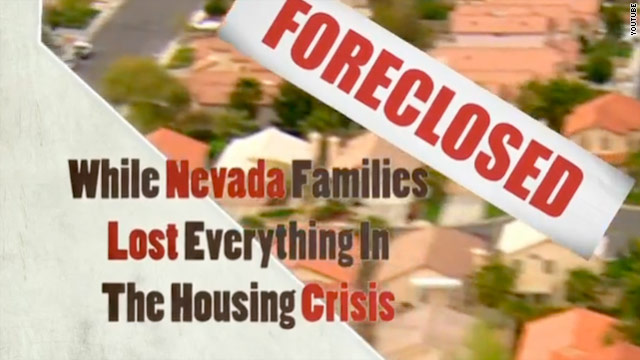 (CNN) - Mitt Romney's campaign took its ongoing attack of rival Newt Gingrich to Nevada Wednesday, slamming the former House speaker for his role advising mortgage giant Freddie Mac in the next battleground in the GOP primary.

The 30-second spot, called "Nevada Families," is similar to an ad that began running Monday in Florida. Both Nevada and Florida have been hit particularly hard by the national housing crisis, with foreclosure rates well above the national average.

The ad takes the Nevada's housing situation head on, saying Gingrich profited from the state's hardships.

"While Nevada families lost everything in the housing crisis, Newt Gingrich cashed in," a narrator says.

The ad then points to Gingrich's work with Freddie Mac, the mortgage giant many Republicans cite as a critical player in the housing collapse.

The ad also takes on ethics charges levied against Gingrich during his time in the House of Representatives, saying he was "sanctioned for ethics violations" and "resigned from Congress in disgrace."

The House Ethics Committee reprimanded Gingrich in 2007 for characterizing a college course he taught as tax-exempt, when in actuality the course was run for political reasons. Gingrich has maintained on the campaign trail the $300,000 penalty he paid following the House ethics investigation was considered reimbursement, and not a fine.

The ad closes with a photo of Gingrich and Obama, and a narrator asserting: ""If Newt wins, this guy would be very happy."

Nevada is the next battleground in the GOP nominating contest, following Florida's primary on Tuesday. Nevadans hold their caucuses February 4.