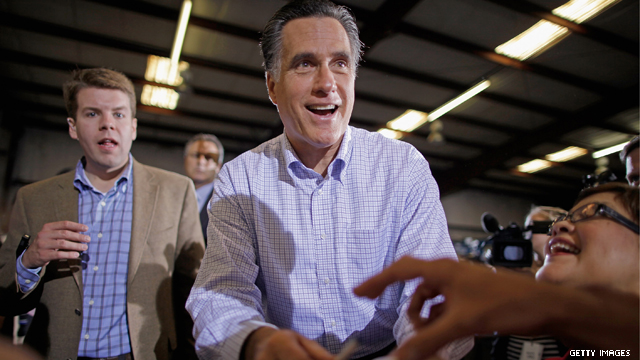 Naples, Florida (CNN) - As he moves to undercut Newt Gingrich's momentum in Florida, Mitt Romney has ratcheted up his criticism of the government-backed mortgage finance firms Fannie Mae and Freddie Mac.

The reason: Gingrich's Washington-based consulting company earned $1.6 million advising Freddie Mac before the collapse of the housing market began in 2007.

In a primary state with one of the nation's worst home foreclosure rates, it's a relationship Romney has been eager to highlight.

Romney has cast Fannie and Freddie as two of the main villains in the housing crisis.

"These guys went out and made all sorts of guarantees and all sorts of circumstances, which should not have been done," Romney said Tuesday at a campaign event Lehigh Acres. "People buying homes they couldn't possible afford to make the payments down the road. These government-sponsored entities, in the case of Freddie Mac and Fannie Mae, are a large reason why our housing crisis has occurred."

But Romney was not always so hostile to Fannie Mae.

In fact, he agreed to be a distinguished panelist at a housing conference sponsored by the Fannie Mae Foundation in 2004.

That was before the mortgage slump began, and Fannie and Freddie did not begin dabbling aggressively in risky home loans until 2005 and 2006.

But Romney's appearance came right as the subprime lending boom was taking off.

According to a brochure released by the Fannie Mae Foundation recapping the event, Romney, then the governor of Massachusetts, spoke alongside former Pennsylvania Gov. Ed Rendell and offered "a gubernatorial perspective" on homeownership.

Romney, the brochure summarized, outlined his economic development goals in Massachusetts and talked about the need to expand access to affordable housing.

Romney was not paid for the appearance.

Andrea Saul, a spokeswoman for Romney, said the appearance was one of many that the governor made at the time to discuss his policy efforts in Massachusetts.

She sought to keep the focus on Gingrich's work with Freddie Mac.

"Speaker Gingrich needs to fully disclose his work as a lobbyist for Freddie Mac and explain exactly what he did to be paid $1.6 million from Freddie Mac," Saul wrote in an email to CNN.

"The bursting housing bubble helped lead to the current economic crisis and Newt Gingrich has his fingerprints all over it. Gov. Romney has spoken to many groups about the success he had as Governor of Massachusetts across many issue areas. While he was talking about his Massachusetts housing initiatives, Speaker Gingrich was cashing Freddie Mac checks," she added.