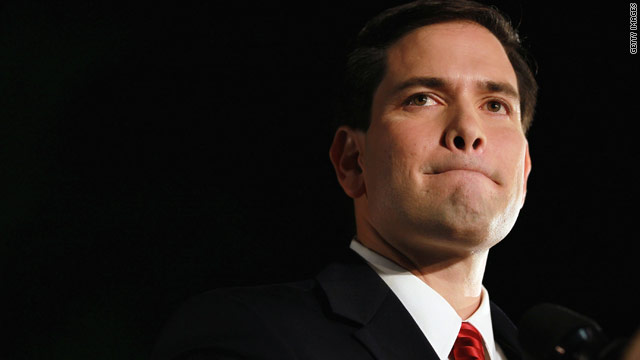 Coral Springs, Florida (CNN) - The Newt Gingrich campaign has taken off the air a Spanish-language radio spot not long after an influential Florida senator lambasted the presidential candidate for releasing an "inaccurate" and "inflammatory" ad about Mitt Romney's immigration record.

"This kind of language is more than just unfortunate. It's inaccurate, inflammatory, and doesn't belong in this campaign," Rubio told the Miami Herald.

Gingrich Press Secretary R.C. Hammond confirmed Wednesday afternoon the controversial ad is no longer running. He said the ad was taken down as part of a scheduled “rotation time for the ads,” not as a result of complaints from Rubio.

But earlier in the day, Gingrich's Florida state director, Jose Mallea, told the Miami Herald the ad was being removed out of "tremendous respect" for Rubio. Gingrich routinely mentions on campaign stops that Mallea formerly worked as Rubio's campaign manager.

The former House speaker did not back down from the now-pulled ad's premise that the former Massachusetts governor is "anti-immigration" when pressed by Univision anchor Jorge Ramos.

Gingrich said Romney "certainly shows no concern for the humanity of people who are already here. I mean, I just think the idea we're going to deport grandmothers and grandfather's is a sufficient level of inhumanity. First of all, it's never going to happen."

When Ramos asked the former speaker about Romney's "idea of self-deportation for the 11 million undocumented immigrants in this country," Gingrich called it "an Obama-level fantasy."

In a later appearance at the same forum, Romney said it was "very sad for a candidate to resort to that kind of epithet. It's just inappropriate."

The Gingrich camp is airing another Spanish-language radio ad that focuses not on his Republican opponent but Obama.

Hammond also said there was a second ad in rotation that challenges Romney to explain his position on Cuba.

A Rubio spokesman said the senator was not available to comment on Gingrich's ad targeting Romney but confirmed the comments to the Herald.

"The truth is that neither of these two men is anti-immigrant," Rubio told the Herald.

"Both are pro-legal immigration and both have positive messages that play well in the Hispanic community," he added.

The spot also resurrects a gaffe Romney made in 2007 when he mistakenly used Fidel Castro's well-known "fatherland or death" catch-phrase in a call for free Cuba.

"Unlike Romney, who uses statements from Castro, Newt Gingrich has fought against the regime," the ad says.

Rubio's comments on the spot come a day after he criticized Gingrich for comparing Romney to ex-Florida Governor Charlie Crist.

A few of Crist's former top staffers now work for Romney. Crist bolted the GOP in 2010 to run as an independent in a losing campaign against Rubio.

Briefly stepping out of his neutral role in the GOP primary, Rubio said there is no comparison between Romney and Crist.

"Mitt Romney is no Charlie Crist," Rubio said through a spokesman

A Rubio spokesman said the senator is not reconsidering his decision to make no endorsement before the Florida primary.

Below is a script of the radio ad:

"Fatherland or Death, we will prevail... (sound byte by Castro)

Mitt Romney is a government liberal, from the state of and similar to Kennedy

He is the most anti-immigrant candidate.

Mitt Romney may have the fame, but he does not have the substance to be our President.

In Contrast, Newt Gingrich is a candidate that has committed himself to the Hispanic community. A Republican similar to Ronald Reagan, with experience.

Unlike Romney, who uses statements from Castro, Newt Gingrich has fought against the regime with Lincoln and Ileana to approve Helms-Burton; he supported the formation of Radio and TV Marti; and is in favor of holding the Castro brothers accountable for the shooting down of the Brothers to the Rescue airplanes.

Newt Gingrich has given his word to the Cuban American community in writing and will not let us down. This January 31st vote for Newt Gingrich by punching number 12 in your ballot."